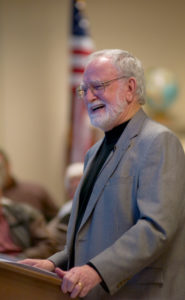 Patrick McManus, a legendary humorist and author whose work was informed by his Sandpoint upbringing, died Wednesday at the age of 84.

The Associated Press reports that McManus, who wrote monthly columns for Field & Stream and Outdoor Life, as well as dozens of humor books, mystery novels and one-man plays, died at a nursing home in Spokane following a period of failing health.

In addition to his writing, McManus taught at Eastern Washington University until 1983 and earned the Distinguished Faculty Award in 2013.

McManus based many of his beloved characters, like Rancid Crabtree, “Crazy Eddie” Muldoon, Strange the dog and Retch Sweeney, on figures he encountered during his youth in the Inland Northwest. Similarly, McManus’ experiences in the natural splendor of Idaho’s forests and mountains made the outdoors a persistent theme in his work.

“It was possible to live a very satisfactory life at that time even though you were fairly poor,” McManus told Sandpoint Magazine in 1995. “That would not be the case today. Like everyone else, we had chickens and a cow and pigs. We raised our own food and went hunting and fishing. We got our water out of the creek with a bucket with a rope on it. Something has happened in our society, where in a sense almost everybody is poor now. I had a wonderful time as a child growing up. I was down by the creek all the time and had all this freedom, running around all these mountains. Vern and I took off one time and wandered around those mountains for a week. That’s not a bad way to grow up.”

McManus’ wife, Darlene, four daughters, and multiple grandchildren survive the author. The Associated Press reports that a private service will potentially be held next week at St. Joseph’s Catholic Church.