When Erin Brannigan heard that Idaho Pour Authority owners Ben and Jeannie Higgs might be looking to sell the craft beer store located on Cedar Street in downtown Sandpoint, he saw a rare opportunity. 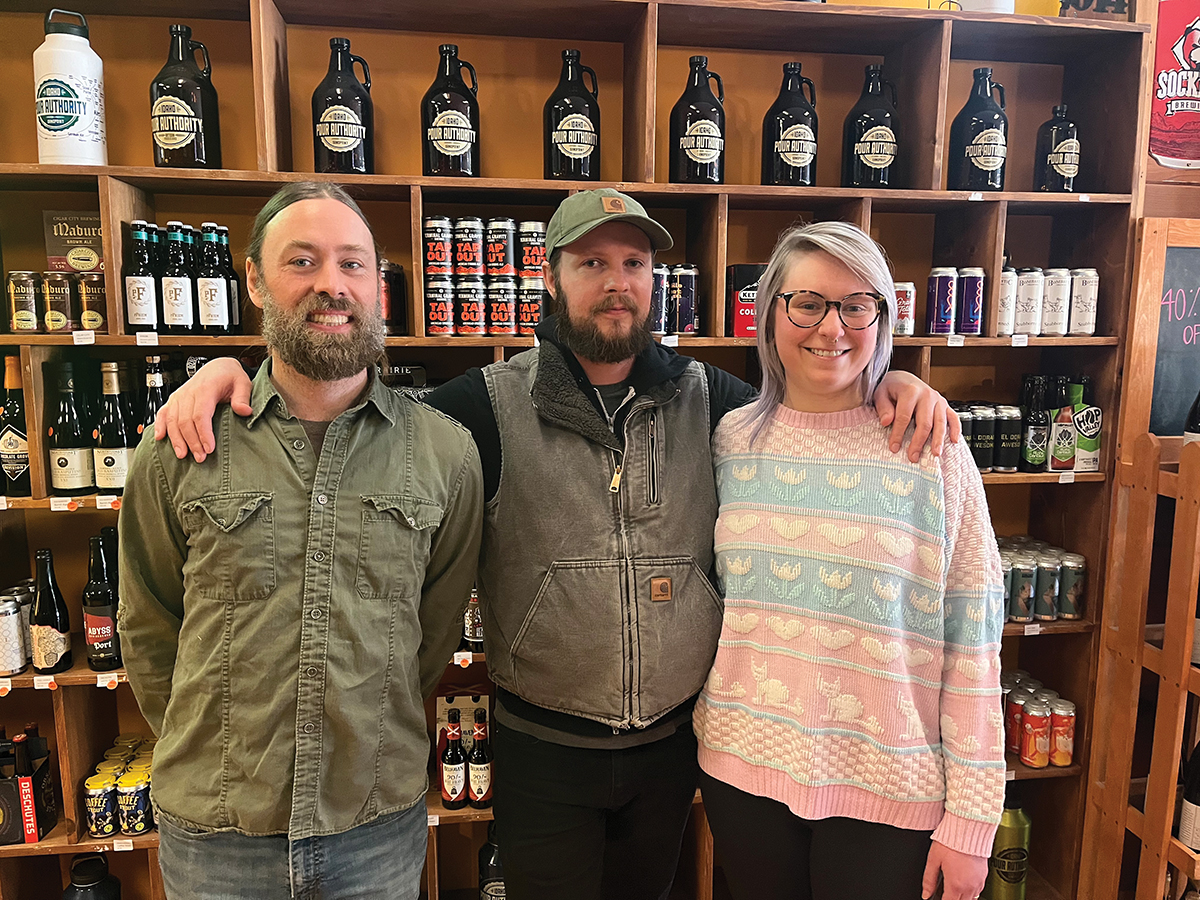 From left to right: Erin Brannigan, Josh Hedlund and Dani Hedlund have taken over ownership of Idaho Pour Authority. Photo by Lyndsie Kiebert-Carey.

“I told [Ben] that I was interested in buying and bringing in two of my best friends,” Brannigan, an employee of the store, said — those friends being local couple Josh and Dani Hedlund.

As for the “why,” Brannigan summed it up pretty succinctly: “We are huge fans of Sandpoint and huge fans of beer.”

After closing the store for a couple of weeks to ensure the proper licensing was in place, the new owners will host a grand reopening of Idaho Pour Authority on Saturday, April 30. The store’s hours are noon-9 p.m. Thursday through Sunday, and 3-9 p.m. Monday through Wednesday.

After weeks of waiting, the crew is excited about getting back to what they love: sharing craft brews with a varied cast of customers, from friends to regulars to those visiting from out of town.

“We accept all-comers and I think it’s been like that the entire time,” Brannigan said, adding later: “The customers are really excellent people from all walks of life.”

Though the Hedlunds have never had a chance to work at Idaho Pour Authority, they’ve been longtime fans of the business.

“I’ve always wanted to work here,” Dani said. “It was time for something new, and this opportunity popped up.”

The chance to “carry the torch” for original owners Jon Hagadone and Vicki Reich, as well as Ben and Jeannie Higgs, was part of the appeal for Josh, Dani and Brannigan.

“It’s an honor to keep their legacy going,” Josh said. “I think this place is an institution at this point.”

The new crew admires the Higgses for keeping the business going — especially as they purchased the business only weeks before the coronavirus pandemic struck in March 2020.

“They’re just such good people in general,” Brannigan said. “It’s been a pleasure working with them. They did not fold in the face of adversity.”

There are currently no plans to change the offerings at Idaho Pour Authority, so customers can expect the same wide selection of beers (over 300 different kinds), as well as wine, seltzers, ciders, cheese platters and locally made pub pretzels.

It’s the kind of variety and quality that “you can’t find anywhere else around this area,” Dani said.

There will also continue to be live music at the store, as well as fundraisers for local nonprofits. It’s those community-based events that have made Idaho Pour Authority the “institution,” in Josh’s words, that it remains almost a decade after opening.

This will be Brannigan and Josh’s second business venture together, as they co-owned Main Street Music in the early aughts. Josh said he is looking forward to getting back into the downtown scene.

“We’ve had an outpouring of support from the community, and from the downtown business family, which is what I missed for a long time — not being a part of that family,” Josh said. “It’s fun coming to work downtown everyday.”

Idaho Pour Authority is located at 203 Cedar St. The store will host a grand reopening under new ownership on Saturday, April 30 when the doors open at noon. Learn more at idahopourauthority.com. Also follow the store on Facebook and Instagram.