On paper, Cindy Marx is retiring. In reality, she is launching on a grand adventure.

Marx will work her last day as executive director of Sandpoint nonprofit Community Cancer Services on Friday, April 29, and then spend the next several months preparing to move herself, her husband, her mother-in-law, two dogs and a cat to Portugal. 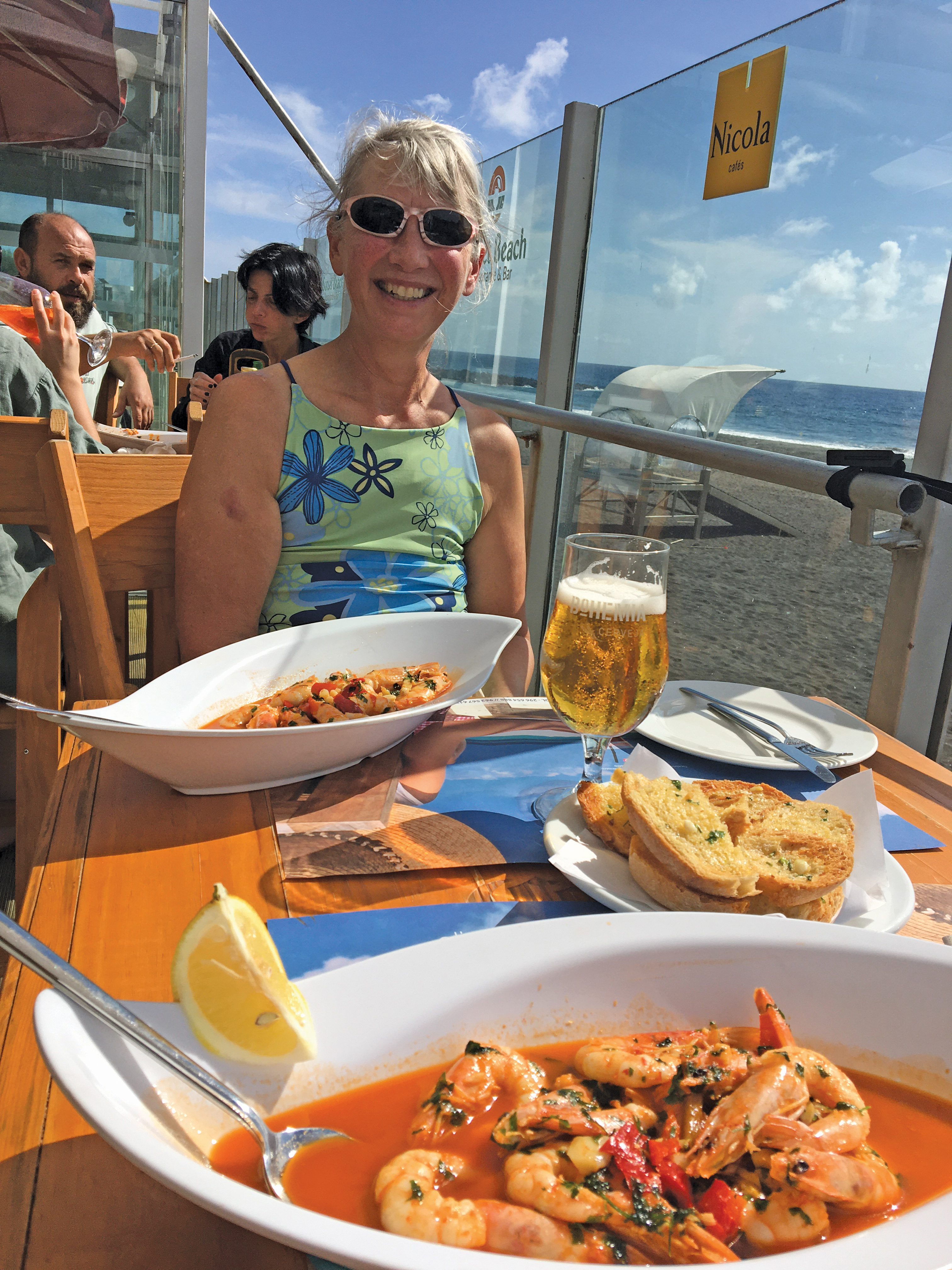 Cindy Marx enjoys a snack in Portugal while visiting in October. Her family will move there after she retires from Community Cancer Services. Courtesy photo.

“I am so ready for it,” she said with a laugh, taking time to talk to the Reader during her last week in the CCS office.

Over her lifetime, Marx has been a career chameleon — that is, she has done whatever work needed to be done, and she did it well. She has coached gymnastics, worked at health clubs, served as a volunteer EMT, been a ranch hand, done human resources, worked at a winery and, since 2016, been with CCS.

“This was my semi-retirement job, and it was something I was passionate about,” said Marx, who moved to Sandpoint in 1990. “I was going to be able to give back to an organization I greatly appreciated, and knew the value of. I was going to be working fewer hours, making less money, but I was going to be doing something important in the community.”

Marx knew the value of CCS because she had been a client, fighting breast cancer in both 2005 and 2008. She learned about the organization’s services firsthand, and joined the board in 2014. In 2016, she became an employee and worked hard to implement new software to better manage fundraising. Since then, several local nonprofits have adopted the same programming and recruited Marx to help them do it.

“We were managing our events on yellow legal pads,” Marx said of CCS prior to her being hired. “It was pretty typical for the size of organization we were, and in the area at the time.”

Marx said that while there are many national cancer nonprofits lobbying for financial support, “they don’t do a lot for small rural Idaho.” CCS strives to put the donations and grants they earn directly into the pockets of local people fighting cancer by offering gas vouchers, lodging assistance, counseling and other services free of charge.

Marx said she has been “amazed and overwhelmed by the support of the community” during her 30 years in North Idaho. She said she’s used her time at CCS to share her own cancer story with clients, urging them to learn lessons from the difficult time.

“In hindsight, when I got my second diagnosis — I’m not a go-to-church religious person — but I just looked at the sky and said, ‘What didn’t I get the first time?’” Marx said with a laugh. “That was one of the things that led me to be here. I needed to shift my life, I needed to shift my job, I needed to get to a place where I was giving back. That was my big life lesson.”

To learn more about Community Cancer Services, visit communitycancerservices.com. Stay tuned for information about Marx’s retirement party (which will double as a CCS fundraiser) later this summer.