Pass me the pumpkin spice

Pumpkin spice has become the flavor to rule all fall flavors — but why?

I take pride in my coffee order: a 12-ounce dark roast drip, hot, no room. 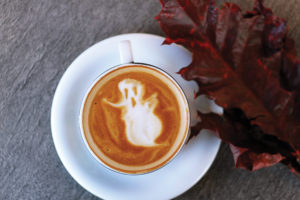 There’s a simplicity and subtle badassery to drinking your coffee black, but in reality, it’s because caffeine must be running through my veins in order for me to contribute to society. My coffee order is within budget, gets the caffeinating job done and, in the interest of full junkie honesty, the flavor makes all the happy little neurons in my brain shudder with satisfaction.

But when fall rolls around, I get an itch. It’s payday, I’m walking right past the Starbucks kiosk to pick up groceries and the craving hits me: I need a pumpkin spice latte, and I need it now.

Five minutes and $6.50 later, thanks to my alternative milk choice, the warmth of orangish-brown goodness is radiating through my fingers. I take a sip and… I’m disappointed. Again. How many years has it been now? Likely since I opened my own bank account and could drive myself into town.

I don’t know what I’m expecting when I order my annual pumpkin coffee. The phenomenal flavor of a cold, firm pumpkin pie on Thanksgiving? The full kaleidoscope of fall leaves to burst before my eyes, filling me with seasonal joy? Do I expect contentedness to wash over me like an autumn breeze as I’m wrapped in flannel and humming along to acoustic tunes?

None of these things happen, but some studies suggest that stellar marketing combined with deeply ingrained nostalgia might be the recipe for Americans buying into so many pumpkin spice recipes.

Starbucks introduced the pumpkin spice latte — known alternatively as the PSL, especially among those who wear Uggs — in 2003. Since then, the flavor has come to grace food products from Oreos to hummus to alcoholic beverages.

Though a large orange gourd is regularly seen on the packaging, pumpkin spice oftentimes doesn’t include an ounce of pumpkin. Rather, these recipes revolve around the trio of signature fall spices: cinnamon, nutmeg and cloves.

Pumpkin spice dominates other holiday flavors like peppermint mocha and apple cider, perhaps thanks simply to flavor superiority or — according to Scientific American — because those spices, along with imagery of pumpkins, are “rooted in the ethos of fall.”

Though I’m not sure I’d argue pumpkin spice connects the consumer more closely to agrarian American history like Scientific American does, there’s something to be said for the lasting relationships made between what we eat throughout our lives and what time of year those flavors and scents made their impressions. Whether pumpkin spice harks back to grandma’s pumpkin pie fresh out of the oven or family trips to the pumpkin patch, it seems nostalgia might be the strongest ingredient at play here.

The pumpkin spice complex is so powerful, in fact, that one study confirms I’m not alone in seasonal affection: researchers at NPD Group found that 72% of PSL purchasers buy only one per year. Only 8% of consumers buy three or more of the lattes over a single season, meaning a majority of sales are connected directly to the limited-time offer and our desire to hold the changing of the seasons in a wax-lined paper cup.

The flavor of my annual PSL may never measure up to my expectations, but it sounds like that’s the key to pumpkin spice’s success — to keep people coming back, searching for that warm fall feeling in the form of flavored coffee, Jell-O and Cheerios.

It’s pretty obvious that we’re losing the battle here, but as far as dietary battles go, there are worse to lose.

I’m back to my regular coffee order for now, but next fall will likely see another $6.50 missing from my bank account and another PSL cup sitting empty, victorious in my cup holder.