In the office above the Panida Theater hangs a calendar of epic proportions.

The timeline spans all the way from January 2016 to next month. It hangs on the wall, too wide and too tall to encompass in a single arm span. There is hardly a day without bright marker filling up the box. Movie showings, musical performances and so much more have been jotted down here before they ever graced the marquee outside. 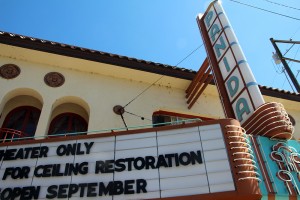 This calendar has been Executive Director Patricia Walker’s life for the last two years, doing a job she says she loves, despite it being a trying endeavor at times.

“Although that calendar’s busy, it’s not enough. It’s takes a continued commitment to keep it alive,” Walker said.

Sandpoint will celebrate that continued commitment Saturday, Nov. 18, at the Panida’s 90th birthday party. The Panida Art Show and reception in the Little Theater will kick the night off at 6 p.m. followed by music, theater, dancing and films on the big screen at 7 p.m. on the Panida’s main stage. Entertainment for the night is inspired by each decade that the theater has been open. Walker said they even managed to get their hands on a clip from the first movie to ever show at the Panida: “Now We’re In The Air.”

Board Chair Nancy Foster Renk said locals should keep in mind that the Panida’s birthday party is the nonprofit’s fall fundraiser.

Local filmmaker and past Panida board member Erik Daarstad said he has been involved with the theater in some capacity since he moved to the area in the ‘70s. He said the Panida is unique because while other American towns have multiple historic theaters, Sandpoint has only one — and it’s still open.

“I’m really happy the Panida has made it this far, and I hope it’ll keep going forever, but it’s a challenge. Just financially, it’s not easy,” Daarstad said. “I hope especially younger people can get behind it a little more, even though they didn’t grow up with it like older people did.”

Walker said that even as the entertainment industry changes and the Panida has to adapt in order to keep the lights on, celebrating another birthday just proves how hard the community has worked to keep the theater open, both by attending shows and volunteering.

“Even in the Great Depression, people budgeted and came out to the movies,” Walker said. “It’s been not just about entertainment — the marquee lights up and it keeps downtown vibrant.”

Tickets to attend the Panida’s 90th birthday bash are available online at panida.org or at Eve’s Leaves and the Skal Taproom in Ponderay.