Shouts and cheers of celebration could be heard from outside Council Chambers as news spread that the Sandpoint City Council voted down a proposed ordinance Aug. 19 that would have granted Mayor Shelby Rognstad emergency powers to mandate the wearing of face coverings within city limits.

Introduced for the second time by Councilwoman Deb Ruehle, the ordinance drew “no” votes from Council President Shannon Williamson and Councilmen Joel Aispuro, John Darling and Andy Groat. Councilwomen Ruehle and Kate McAlister voted in favor, both citing input from constituents, a majority of whom the latter said expressed to her in recent days that they supported requiring face coverings in public places.

“It’s really sad that it’s become such a divisive issue in our community,” McAlister said, noting that “Councilwoman Ruehle is being bullied because she’s worried about your health.” 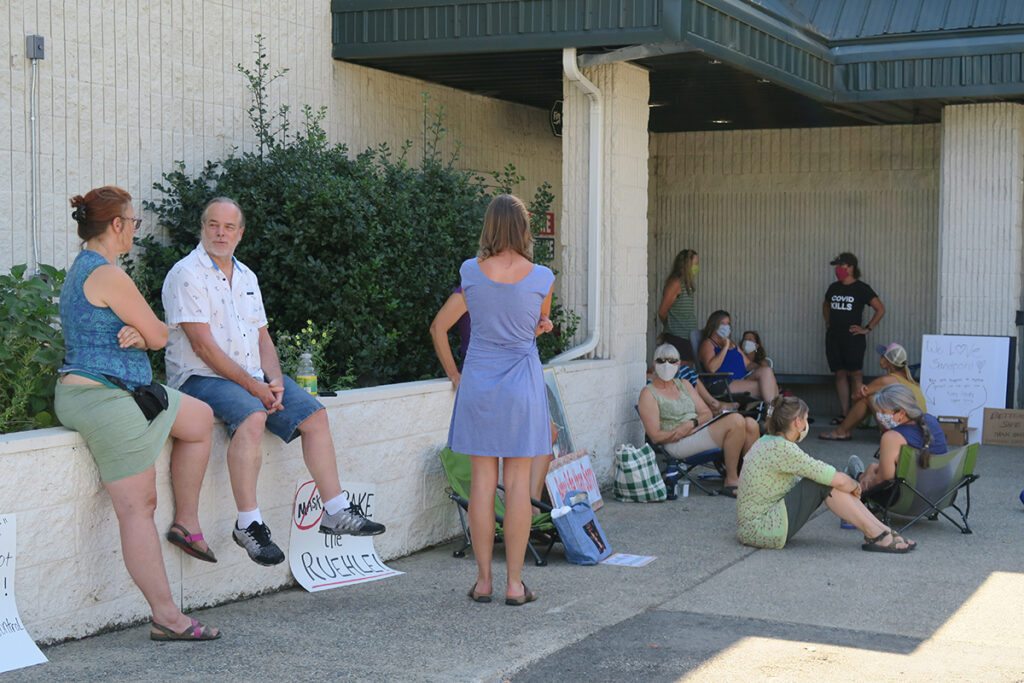 The passion with which the issue has been taken up by the community has been front and center for weeks. The city of Sandpoint solicited online comment on the issue, garnering 883 total comments — 413 in favor and 470 against. Broken down between city and county, the former responded 102-81 in favor and the later 97-72 against. The remainder of the respondents did not indicate their community of residence or could not otherwise be confirmed, breaking down 292-239 against.

“Never before have we seen such an overwhelming response from the public on any issue, ever,” Rognstad said.

Owing to the flood of written responses, the Council did not take verbal testimony on the proposed ordinance, but plenty of discussion took place on the dais.

For Councilmen Groat and Aispuro, the issue came down to self governance.

“It sounds like our community has done a great job with what we’re currently doing now,” said Groat, referring to a COVID-19 update offered earlier in the meeting by Don Duffy, who serves as Public Health Services Administrator for the Panhandle Health District.

Duffy told the Council that Bonner County’s COVID-19 numbers in the past two weeks give reason for cautious optimism. The county currently has 21 active cases with fewer than 2% hospitalized — the rate per 100,000 population over a seven-day average being about 4.1, compared to 17.8 in Kootenai County.

“That’s a very low number and what a marvelous blessing,” Duffy said.

While Duffy made it clear that mask wearing, along with social distancing, frequent hand washing and self isolating when sick, has been proven effective at dramatically reducing the spread of COVID-19, he underscored that the mask mandate in Kootenai County came down from PHD because that community’s number of cases was increasing rapidly and far greater than those found in Bonner County.

“There’s a lot of good work happening in this community,” specifically at Bonner General Hospital, which he singled out for praise in “leading the charge” early on to help slow the virus.

“We’re a very capable community,” said Aispuro, later adding, “If you’re willing to go out you’re taking a risk whether you wear a mask or not.”

Ruehle last broached the idea of a mask mandate in July, but that proposal failed for lack of a second. Fellow council members asked that she return with additional data — which she did, along with a formal ordinance that suggested noncompliance would carry a $300 misdemeanor fine and up to six months in jail. When the Council balked at the severity of those penalties — “That’s excessive,” McAlister said — Ruehle said she was willing to amend the ordinance to include only the $300 fine, but added that the proposed enforcement came from health district guidance.

“We don’t need to reinvent the wheel, we just need to make it work for us,” she said.

Sandpoint Police Chief Corey Coon testified to his officers’ ability to enforce such a mandate, calling it “pretty challenging.”

“There’s some legitimate concerns legally when we stop and talk with somebody [about breaking a law],” he said. “The educational piece is something we know we can do pretty effectively.”

Rognstad suggested a “middle path,” with a mask mandate that serves to “state our values and our respect for public health” while looking for an enforcement structure focused “entirely on education.”

“I don’t think that we want to make ourselves a COVID tourist site,” he said, referring back to earlier comments from Aispuro that many visitors this summer have flocked to Sandpoint specifically because it has not mandated face coverings, as some surrounding communities have.

“In the short term that might be good for business, but in the long term that exposes us to greater risk,” Rognstad said.

While Ruehle likened the $300 fine for noncompliance to penalties such as those meted out for speeding, seatbelt violations and texting while driving — “I would encourage strong education and that these fines would be used at officers’ discretion,” she said — her proposed amendment failed for lack of a second.

Saying “I’m just not there” when it comes to giving the mayor authority to impose a mask mandate, Williamson emphasized that, “I wear a mask. I have my family wear a mask. I encourage everybody I know to wear a mask. But I’ve also heard and spoken to many people … about the science that you may or may not believe in and I can talk until I’m blue in the face and you probably won’t wear a mask.