One with an extensive background in coffee and the other an experienced businessman, two brothers came together exactly a decade ago to create a product and place now ingrained in Sandpoint’s character.

Rick and Randy Evans — owners of the eponymously named Evans Brothers Coffee Roasters — are celebrating 10 years of coffee and local camaraderie with a celebration Sept. 14. 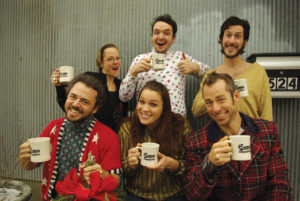 The Evans brothers moved to Sandpoint in 2008, seeking the outdoors and the chance to raise their families in a smaller, “genuine” community, as Rick described it. It didn’t take long before the idea of co-owning a coffee roastery took shape.

“I had a vision of building something that was the central place of the community,” Rick said. “One of those places that’s the go-to spot when you visit Sandpoint.”

Not only did the Evans brothers accomplish that local mission, but their vision has led to world travel. Rick, Randy and their roasting staff regularly travel to the places where their coffee beans are grown in order to develop personal relationships with the farmers. Those connections, along with coming home to share knowledge from abroad with local coffee enthusiasts, is what Rick believes has helped the business thrive.

“We’ve always been about quality coffee and connecting people to that beverage and where it comes from,” he said. “That starts to resonate with people. They realize, ‘These guys are really into their craft.’”

Evans Brothers Coffee started as a wholesaler, but when the business incorporated a small coffee bar beside the roasting warehouse — a place where customers could sample their blends — it took off like a caffeinated rocket. Any reservations about the cafe portion of the business faded when Evans Brothers placed third in the “America’s Best Coffeehouse” competition at Portland Coffee Fest 2015.

“I don’t know if we saw ourselves the same as the model companies we looked up to, but then all of a sudden we’re up there with them,” Rick said of his reaction to the award. “We really enjoy [having a cafe] because it allows us … a chance to interact with people that are drinking our coffee. [We enjoy] the individual conversations we can have with people.”

They liked it so much that they opened a second cafe in Coeur d’Alene in late 2017, and just announced Sept. 6 that Spokane will soon have an Evans Brothers cafe to call its own.

The Sept. 14 celebration will include free drip coffee all day, 12-ounce bags of coffee for $10, a bounce house and dunk tank. There will also be live music from Bright Moments Jazz starting at 4 p.m., followed by local rockers Right Front Burner.

“We really appreciate the love and support of our community and the customers we’ve had for years,” Rick said. “This party is us throwing something to thank the community.”

As Evans Brothers Coffee expands its reach into the greater Northwest and the rich scent of roasting beans continues to waft from the rustic walls of 524 Church St., it’s safe to say year-10 is only the beginning for this family-owned, community-loved institution. As for that success, Rick credits the genuine connections he and his brother have been able to make in Sandpoint.

“I like to think that we’re authentically who we are — that we’re being real and not trying to put on a front,” he said. “Randy and I have both been blessed to make a lot of friends.”