Off Broadway, on point

Exit, Pursued by a Bear to play at Panida Little Theater

Twice a year, in her attempt to embrace the muse, Dorothy Prophet directs and produces a play with local actors. After a two-year hiatus due to COVID-19, Prophet is excited to announce the production of Exit, Pursued by a Bear. 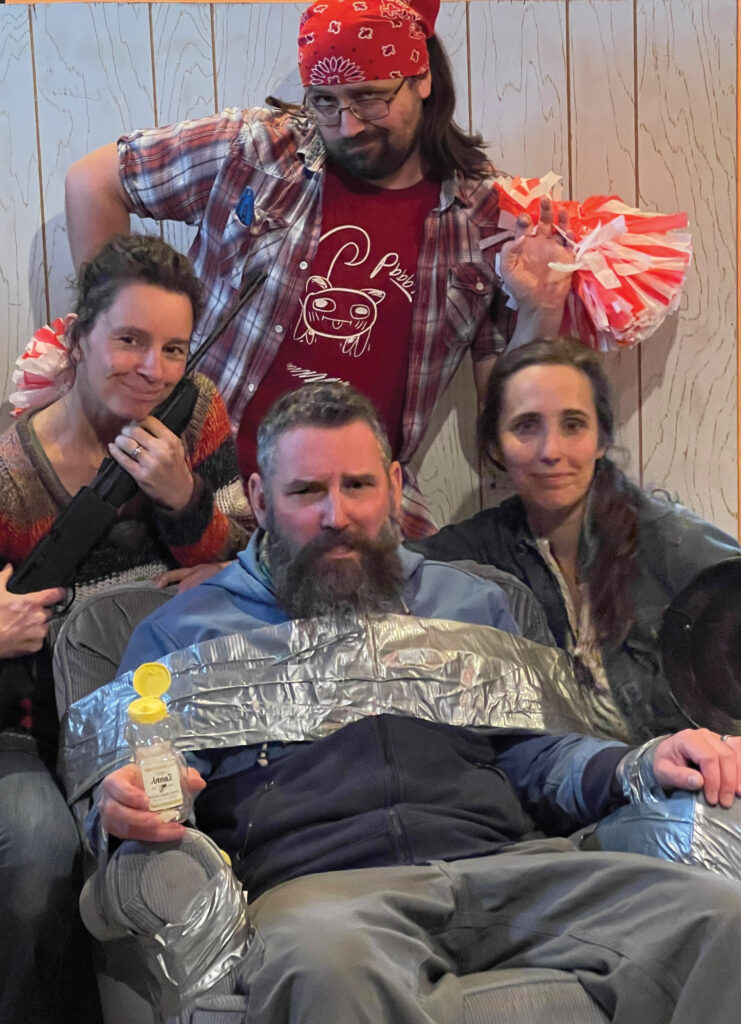 Written for Broadway by Lauren Gunderson, Exit will play at the Panida Little Theater from Friday, May 27-Sunday, May 29. Doors open for the Friday and Saturday shows at 6:30 p.m., with a matinee at 3 p.m. and evening show starting at 7 p.m. on Sunday.

Exit is presented by Cade Prophet Memorial Productions, a nonprofit creative organization started by Prophet to honor her son, who died in a tragic accident on Memorial Day 2017 at just 25 years old. Prophet produces two plays each year under this banner, with all profits from the May shows benefiting her son’s most-beloved local organization, the Better Together Animal Alliance.

“That was Cade’s favorite place,” she said. “Even when he grew up and moved away, he always wanted to visit the ‘inmates’ at the shelter. We give them money because that’s what Cade would want us to do.”

Gunderson’s play is a quirky tale about a woman named Nan who has been in an abusive relationship and decides she’s over it. Nan, played by Meredith Fields, decides to act out scenes from her marriage to her husband, played by Seneca Cummings, who she has duct taped to a chair so he can see the error of his ways.

“It sounds weird to say this, but it’s a comedy about domestic violence, which sounds counterintuitive, but it really makes a point,” Prophet said. “You’ll get the point while you’re laughing.”

Rounding out the cast are Cory Repass playing Simon, Nan’s best friend since junior high, and Valarie Moore playing Sweetheart, a stripper with a lot of heart. Prophet has worked with the cast in prior productions, but it’s Moore’s first play.

“I worked with her for the Follies, but she’s never worked with a theater production before,” Prophet said. “But I knew she could do it. I wanted to get her into the fold. Once you’ve worked with one of our plays, you don’t get out. We’re family.”

Prophet said she prefers directing plays with smaller casts because of the close-knit nature of the production.

“I always pick smaller-cast shows just because I like it better,” she said. “It creates better camaraderie when there’s a smaller cast. With this May show, that’s the whole point. I just want to hang out with my friends and distract myself because I hate the month of May. That’s when Cade died.”

Tickets for the play cost $16 for general admission and $12 for students and seniors, and are available for purchase at Eichardt’s Pub.

After such a long time away from the stage, Prophet said she’s excited to enter the world of theater again.

“I love to tell a good story,” she said. “With this play, after people come to see it, I think people are going to leave uplifted and inspired. It looks at things from a different perspective in regards to a very serious topic. It makes you laugh, but also makes you think. I think art needs to change you in some way, whether it’s a play, a movie or a painting, because otherwise what’s the point?”

For more information on the play and Cade Prophet Memorial Productions, visit cadeprophet.org.