Local residents gathered this weekend in solidarity for the Standing Rock protests in North Dakota.

The Sunday assembly at the Gardenia Center voiced support for the protests and the Veterans for Standing Rock group, which mobilized to protect protesters. The conflict centers on a proposed pipeline routed under the Standing Rock Sioux Reservation’s water supply. Opponents of the pipeline say the the environmental risks are coupled with violations of the Fort Laramie treaty between the United States and the Sioux. 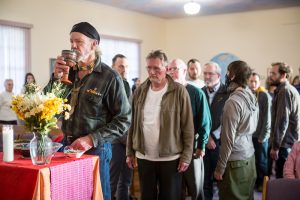 Seth Phalen stands at the head of the line in a gathering acknowledging access to water as a basic and essential human right. Photo courtesy Marsha Lutz Photography, www.mlutzphoto.com

Beyond supporting the protests, the gathering highlighted the need to protect local waters. With much of the community’s economic vitality and well-being dependent on Lake Pend Oreille, organizers emphasized the importance of being water protectors at home.

The local gathering coincided with a victory for the thousands of protesters when the Obama administration halted construction of the pipeline. The Army Corps of Engineers denied an easement necessary to build the pipeline under Lake Oahe and announced it was investigating alternate routes.