This headline might sound odd in the light of President Trump’s move to pull out of the Paris Climate Agreement. However, this decision makes state and federal climate action even more important, and it is gaining momentum despite contrary impression. 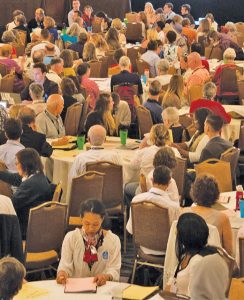 In North Idaho we don’t have to deal with current rising sea levels or ocean acidification, but growing threats of extreme precipitation, drought, fire danger and pest invasion are looming in a real way.

A group of engaged Sandpoint and Coeur d’Alene Citizens have recently formed a Sandpoint Chapter of Citizens Climate Lobby (CCL) to raise awareness of climate change impact and viable solutions. Tim Dec, CCL’s regional NW coordinator came from California to conduct the training and give a KRFY interview (available as podcast on KRFY.org) as well as a public presentation. Already 55 members strong, we present a formidable local force working with public outreach via presentations, the media, legislators, and chapter development.

CCL’s purpose is to raise political will from the grassroots up for legislators to pass federal climate legislation.  This has been paying off as the weekly growing numbers of Climate Solution Caucus members show. The federal bipartisan caucus currently has 40 members and is exploring economically viable options to reduce climate risks. One of the proposed policies includes a Carbon Fee and Dividend (CF&D) that would make fossil fuels reflect real cost while returning dividends to households which has been shown in independent studies to grow economy while reducing CO2 emissions. CF&D has the support of economists, conservatives and big oil business alike as it provides for long-term stability without growing more government.

CCL Sandpoint Chapter members are excited to contribute to this pro-active, hope inspiring initiative and invite other community members to join.  We look at the CF&D policy as an insurance policy that will be effective regardless of whether climate change is human caused or not. If climate scientists are correct we cannot afford to not do anything in order to avert disaster for future generations. If they are not correct we still clean up the environment and grow economy. No politician would refuse such a policy!