A new wildfire named Three Sisters Fire has broken out three miles northwest of the town of Bayview. 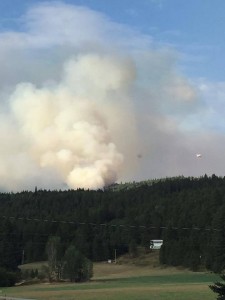 The Three Sisters Fire sends a plume of smoke into the air near Bayview. Photo by Mike Peck.

The Three Sisters Fire has spread to 150 acres and is still 0% contained.

There is a total of 200 fire personnel working on containing the fire, including four 20-person hot shot and Idaho Department of Lands crews, 5 engines, 2 dozers, 2 helicopters, and 2 other air resources.

The fire is located approximately 3 miles NW of the town of Bayview, 1.5 miles north of the old Cape Horn Fire perimeter. The fire was first reported at 3:30 p.m. Tuesday, August 4.

The fire is actively burning in heavy timber. IDL engines responded within 15 minutes of the fire report and immediately ordered air resources to use water and retardant to slow the fire growth. Fire crews and dozers worked throughout the night to establish a fire line on the south end of the fire.

More fire resources are expected throughout the day today. The weather will continue to be warm, dry and breezy. With prevailing winds from the south, the fire growth is predicted to continue heading north.

The nearest structures are approximately 1 mile away and not considered threatened at this time. As a precaution, structure fire engines are staged at those locations.

There are two road closures:

Residents of the area should consider registering to receive information regarding emergency situations in Bonner County via mobile phone, email and computer. For more information: www.nixle.com.