New book explores the efficacy of religion in the current age

Blue Creek Press announces the publication of “All Fish Have Bones: a Recovering Catholic’s Advice on Living a Good Life Without Religion.”

Dick Sonnichsen grew up Catholic in Coeur d’ Alene, eating fish on Fridays, most often out of a can. It’s a long way from the mountains of Idaho to the ocean. “I always believed.” Sonnichsen says in his introduction, “that a best-selling book for Catholics living in the Northwest would be ‘101 Ways to Disguise the Taste of Tuna.’” 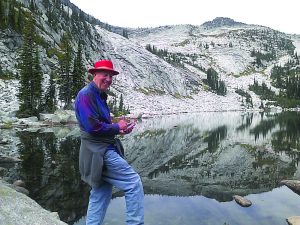 That same sense of humor is sprinkled over the top of the ample evidence supporting the thesis contained in “All Fish Have Bones,” evidence gathered over a number of years of exhaustive research. Sonnichsen’s 30 years as an FBI special agent served him well in gathering supporting substantiation for the book, as he systematically and quite thoroughly debunks Christian religious mythology in favor of the methods and conclusions of modern science.

Sonnichsen was educated in Catholic elementary and high schools and faithfully attended Mass and myriad Catholic Church functions and ceremonies for decades. He learned,  “. . . we were all sinners and only through contrition, humble obedience to Church rules and regulations and the benevolence of our Creator would we ever enjoy a pleasant afterlife.”

Eventually, he decided that there was “something wrong with this picture,” and began to explore the origins of and motivations for his beliefs. What he discovered is the subject of “All Fish Have Bones,” an in-depth look at the dogmatic, paternalistic, outmoded and virtually unprovable doctrine of the Christian Church—Catholicism in particular.

The “fish” metaphor is based on conversations he had as a child with his father on occasions when fresh fish was substituted for canned tuna on Fridays. Inevitably, he would ask, “Does this fish have bones?” and his father would answer “All fish have bones.” Over time, Sonnichesen took this to mean, “See for yourself, and make up your own mind,” a philosophy that finally led him to explore his own faith. 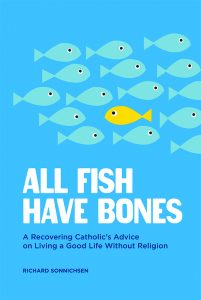 In “All Fish Have Bones,” Sonnichsen tracks his life journey from committed Catholic to skeptic, explaining in scholarly detail why he has come to be an “unbeliever” and what it has done for him emotionally, mentally and spiritually.

Sonnichsen confesses early that he is not a theologian, nor was it easy to come to his conclusions. “Several years of copious reading, research, and considerable contemplation preceded this decision,” he writes. “I have not formally studied theology, except for religion classes in high school, nor do I have access to any special revelation. However, for seven-plus decades I have participated, observed and experienced the effects of religion and I believe that background, coupled with research, gives me some standing to write about it.”

Sonnichsen reveals his logical approach to exposing and exploring the myths of the Christian religion in favor of the realities of common sense and science. The good life is not about “being good.” Meeting the rigid and illogical demands of an unknowable Creator does not necessarily lead to being happy here and now.

He is not unsympathetic to the plight of the struggling church and offers some interesting and relevant insights: “The survival of Christianity may depend on its ability to reexamine ancient doctrine, determine its relevance to modernity, and reinterpret its meaning and application in the 21st century.

“De-emphasizing Original Sin, softening the portrayal of a vengeful God and reinventing the Christian church as a sympathetic, caring, neighborhood institution may aid in its survival . . . “

If you harbor doubts about your religious beliefs and feel confused and alone in your disbelief, “All Fish Have Bones” is a book that can help resolve your uncertainty.