April is National Autism Awareness Month, which is intended to shed light on the growing issue of autism around the world.

Locally, Team Autism 24/7 has worked hard to promote autism awareness in Sandpoint. They have had teams compete in the grueling 3,000-mile bicycle Race Across America. They have hosted speakers and special summer programs which help those falling on the autism spectrum. They also host special films from time to time, with proceeds going toward furthering their mission. 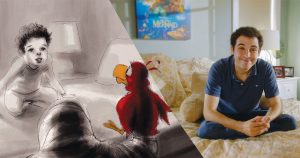 Owen Suskind, the subject of “Life, Animated” which will show at the Panida Theater on April 21. Courtesy photo.

You can support Team Autism 24/7 by attending “Life, Animated,” an Academy Award-nominated documentary film directed by Roger Ross Williams. The film plays at 6 p.m. Friday, April 21 at the Panida Theater.

Based on the best-selling book by Ron Suskind, “Life, Animated” is the inspirational story of Owen Suskind, a young man who was a non-verbal child until he and his family discovered a unique way to communicate by immersing themselves in the world of classic Disney animated films.

Both a coming-of-age tale and educational opportunity for viewers to understand autism more clearly, “Life, Animated” follows Owen as he graduates to adulthood and takes his first steps toward independence.

According to their website, Owen was a thriving three-year-old until he suddenly and inexplicably went silent. He was unable to communicate with other people until, after repeated viewings of Disney classics like “The Lion King” and “The Little Mermaid,” Owen was able to find useful ways to help understand complex social cues. Through the viewing of these films, he was able to re-connect with the world around him.

“Life, Animated” beautifully interweaves Disney sequences with scenes from Owen’s life, helping the audience to understand the connection he has with characters like Ariel, Simba and Jafar.

Proceeds from the film will benefit Team Autism 24/7. For more information about autism, please see their website at www.teamautism247.com.