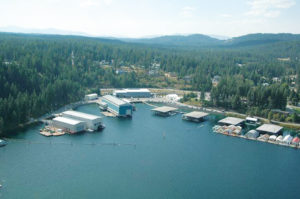 Navy Times reported April 5 that the barge, used “as part of a mission to develop and test submarine models and the technology that helps make boats silent and sneaky,” capsized Feb. 11. Lake Pend Oreille is an ideal location for acoustic research due to its depth and low activity.

Investigators are currently looking into what caused the damage. Navy Times reports that officials suspect a build-up of ice might have become too much for the structure, according to Navy spokesperson Roxie Thomsen Merritt.

“The weather conditions on Lake Pend Oreille were generally severe leading up to the event, with very cold temperatures and large amounts of accumulated snow and ice on the (barge),” she said in an email to the Navy Times.

The incident is filed under “Class A,” meaning it’s a complete loss or entails $2 million or more in damages. Merritt said crew members were sent to salvage the barge so it wouldn’t damage underwater facilities, and officials haven’t yet decided whether to restore it.