I couldn’t be happier to report to you that I will soon have my second Moderna vaccination under my sleeve, and it already feels so liberating. I’m not yet sure how it will impact my daily life, but visions of freedom dance through my head. Will I travel more? Will I take up a seat in a favorite local restaurant or go to the odd gathering that I’ve so sorely missed this past year? One thing is certain, I won’t be going anywhere until my humble home is back in order.

Given the ever-expanding gaggle of grandbabes in my life, I needed more sleeping space and found the perfect solution in a set of triple beds for each spare bedroom. From top to bottom, I can stack them in a series of twin, double and a bonus pull-out trundle bed. Lots of room for little ones to sleep; but, now with the trundles, I’ve lost living space for at least a half dozen under-bed totes, filled with linens, papery party supplies, oversized chargers and tarnished silver.

Trying to find (or create) the needed space for them, I started a serious reorganization project and soon realized that there are two genres of items filling every nook and cranny of my home (and garage): family ephemera and anything remotely cooking related.

I’ve never considered myself a hoarder — OK, maybe an organized stasher — but what’s going on behind closed doors (and drawers) is more than 100 cake pans.

I know. I was surprised, too. And there’s not a single one I can part with. Even though I haven’t made a wedding cake in a few years, I feel like there are still a few IOUs out there.

I did sort through all the gadget drawers, and though I could never part with the extra crinkle cutters, pastry scrapers and truffle shavers, I did, at least, gather, tote and label them before stacking them on the shelves in the garage. Someday, I’m certain my children will thank me.

It’s all pretty time consuming, this organizing business, and I know I’d be a lot more efficient if I didn’t spend copious hours examining each treasured scrap from multiple generations. Lots of curls from first haircuts, a program from my first Broadway experience (Annie), myriad fancy menus and programs from past catering gigs, and so many diplomas (even Gram’s from Common School).

What I especially love coming across is anything handwritten, in either my mother’s or grandmother’s script — especially recipes. Many are from the ’70s. I suspect my newly widowed grandmother was trying to spice up her bridge club gatherings with some creative offerings. Her recipes include herbed cheese spreads, individual molded jello salads (languishing on shredded iceberg) and homemade coffee liqueur (Kahlua).

I well recall the batches of Kahlua my matriarchs churned out. It was always made in the early fall, to be ready for Christmas consumption. Two of the main ingredients were “instant coffee crystals” and “cheap vodka” (sorry, Tito). I can’t lie, seeing that recipe, written in fading pencil, gave me an urge to head to Evans Brothers for some cold-pressed coffee and brew up my own, albeit higher quality, batch of counterfeit (classy) Kahlua.

Besides Kahlua, my clan made copious amounts of (bitter!) chokecherry wine. Making hootch must have been a thing back then because I remember our immigrant neighbors enthusiastically gathering and sorting fruit, then concocting all kinds of homemade spirits: Slivovitz, the Slovenian plum liqueur; the Polish cherry liqueur Wisniak; and Amaro, which is Italian herb liqueur.

My memories are somewhat vague, but I do recall the ladies drinking these prized libations after dinner in tiny, colored cordial glasses and — crazy as it sounds today — pouring miniscule amounts over scoops of vanilla ice cream for we, wee, children.

I guess this apple didn’t fall far from the tree, because I’m actually pretty fond of mixing up my own signature batches of hootch — huckleberry, specifically, made with high quality vodka. Some things change and at least I know better than to try and tip a little of this liquid treasure over the dishes of frozen yogurt I serve to the grandbabes.

That said, I am known to add a bit of liqueur to a few of my baked goods. I mean, you can’t make Kahlua brownies without Kahlua, right? Give these decadent brownies a try and I’m pretty sure you’ll agree. You might even want to take a nip or two while you’re cooking — to commemorate National Kahlua Day (honest!) on Feb. 27. Salud! 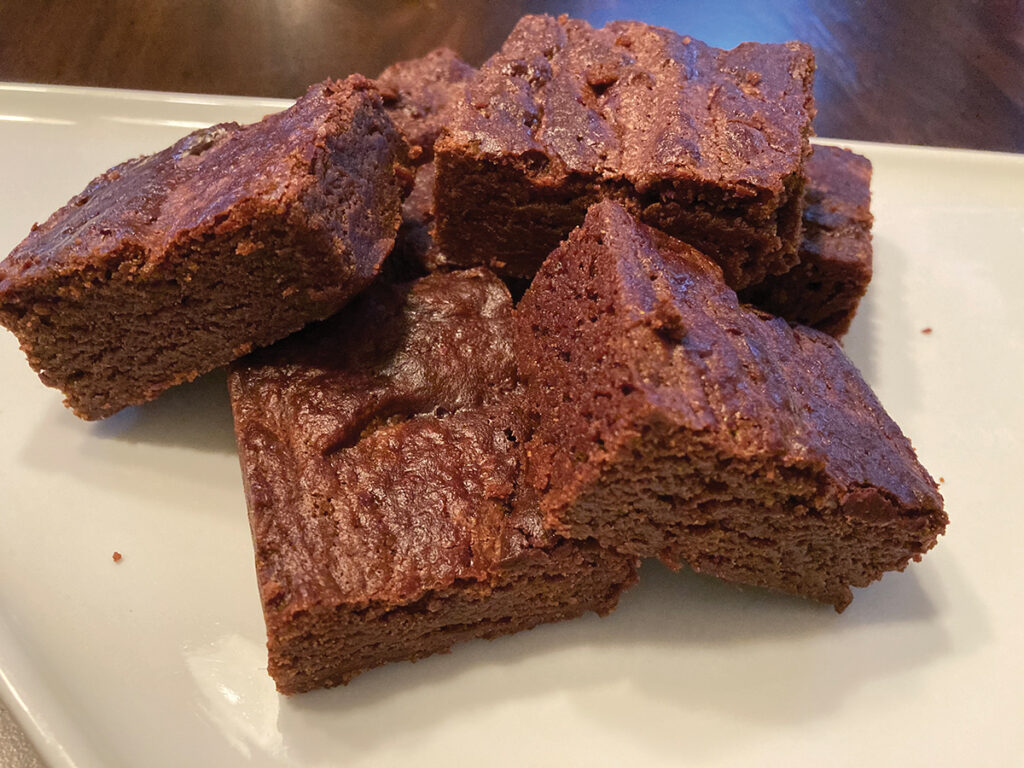 For best brownies, don’t overmix and don’t overcook — I recommend hand-mixing.
Makes 1 9×9-inch pan (that’s between 6-16 brownies, depending on whether or not you have teens in the house.)

In a medium bowl, sift the flour, salt and baking powder; set aside.

Set a heatproof bowl over a pan of simmering water. Place the chocolate chips and butter in the bowl and stir until melted and smooth. Remove from heat and let cool a bit.

In a large bowl, whisk eggs. Add the sugar, 1/2 cup Kahlua, whisk until smooth and add chocolate mixture. Beat by hand until mixed well. Mix in the dry ingredients and beat just until combined.

Pour the brownie batter into the prepared pan. Bake for about 35 minutes, or until the top cracks slightly and a toothpick inserted into the center comes out moist (don’t overcook).

Remove the brownies from the oven and immediately brush warm brownies with 2 tablespoons of Kahlua. Let the brownies cool completely and serve. Cover and store leftovers (if any!), in the fridge.