As decades of language arts teachers have told us, there are four central forms of conflict inherent in any narrative: character vs. character, character vs. society, character vs. self and character vs. nature. While almost every story by definition features conflict between characters, some of the best zero in on nature as a motive force.

Though diametrically opposed in theme and style, The Lighthouse and The Aeronauts do a better job of evoking the high anxiety of humankind’s struggle against the elements than any others since maybe The Revenant in 2015. (And if you haven’t seen The Revenant yet, which features Leonardo Di Caprio’s Oscar-winning performance as Hugh Glass in his epic contest with the Montana wilderness circa 1823, then set aside a few hours to be gloriously harrowed.)

Different though they may be, The Lighthouse and The Aeronauts share some crucial elements: they focus on two mismatched individuals put in a situation of environmental extremis, where they’re forced to come to grips not only with the world around them, but their own internal landscape — for good or, as in the case of The Lighthouse, very much for ill. Here’s our take: 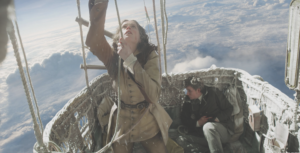 Still from The Aeronauts. Courtesy of Amazon Studios.

Don’t let the feel-good, odd-couple disposition of this Amazon original fool you. It comes off as a bit flabby in the characterization department — Eddie Redmayne’s earnest, sciencey misfit set against Felicity Jones’ daring-yet-damaged woman-ahead-of-her-time is just a bit too pat. That doesn’t really matter, though, as the half-baked personal dynamics are overshadowed by the setting of the film.

It takes place over the course of only one day in the 1862 as the inspired-by-true-events characters of meteorologist James Glaisher (Redmayne) and fictional pilot Amelia Wren (Jones) rise upwards of 36,000 feet above southeast England in a record-breaking balloon ascent.

Look past the dull — and ultimately failed — attempts at making these characters interesting as people and revel in the breathtaking skyscapes, let yourself be taken by the sense of wonder and terror at the notion of dangling in a wicker basket beneath a bladder of burning gas, and thrill to the death-defying heroism involved in surviving an environment in which no human being should by any rights ever find themselves.

There’s been a bunch of humbugging online about The Aeronauts’ fast-and-loose usage of history. The character of Amelia Wren was invented out of thin air — so to speak — replacing balloonist Henry Coxwell, who in actuality flew alongside Glaisher in their history-making flight.

But, again, it hardly matters. The first and last reason to watch The Aeronauts is its environment. As the old saying goes, “as above, so below,” and one of the most interesting aspects of the film is how much sailing through the clouds is freighted with the same rigors as sailing on the sea. Yet, transferring the characters of Glaisher and Wren from the balloon basket to the deck of a ship — even throwing them into the same squalls and sending them into the same riggings — wouldn’t be nearly so gripping.

This one’s a visual treat well worth the watch, but don’t go looking for deep interpersonal truths. 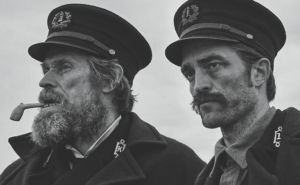 Still from The Lighthouse. Courtesy of A24 Films.

We cannot stress enough that this movie earns its R rating. Seriously: Do not watch this film unless you’re prepared for disturbing imagery, the darkest of humor, soul-rending madness, animal rage and irredeemable depravity. For as sunny, airy and brisk as The Aeronauts is, The Lighthouse is dark, wet and absurdly dangerous.

Directed by Robert Eggers (whose acclaimed debut The Witch in 2015 knocked critics and audiences on their heels with its beautiful malevolence), The Lighthouse is one of those movies that feels drawn out of time — not only because of its setting on a wind- and sea-shattered island somewhere off the coast of New England in the 1890s, or its sumptuous black-and-white aesthetic, but because it’s just so damn smart, scary and good. In other words, they don’t make ’em like this (very often) anymore.

The bulk of what studios have deemed big-screen-worthy in the 21st century have been vehicles market-tested and designed to generate fandoms, which in turn feed on themselves to create billion-dollar media franchises. The Lighthouse, meanwhile, is an honest-to-god film lover’s film, starring Willem Dafoe in a perverse inversion of his role in Platoon and Robert Pattinson giving every single piece of his essence to overpower and out-intensify his legendary counterpart (insiders say Dafoe had to appeal to Eggers at least once to break filming because Pattinson was scaring him on set).

No plot summary does the film justice: Two guys, one young and the other old, are stuck together tending a lighthouse. They (maybe) go crazy as they contend against blasts of North Atlantic weather, battling storms in their heads and outside — all the while beset by whiskey- and later turpentine-soaked hallucinations conjuring all the horrors of the depths, both watery and human.

Not for the squeamish — every bodily fluid comes into play, along with tentacles, copious farting and utter contempt for hygiene — it’s Herman Melville-meets-H.P. Lovecraft-meets-Carl Jung in this jaw-dropping tone poem that would turn us on to lamp oil cocktails if it wasn’t so subversively funny and perfectly horrifying. Available for purchase, though not rent, on Amazon.