One mother’s quest for action

One year after her son fell to his death at Palouse Falls State Park, Dorothy Prophet is seeing changes implemented

Just over a year ago, Dorothy Prophet took a phone call no mother wants to receive. Prophet was told her 25-year-old son Cade slipped and fallen over 40 feet from a cliff above Palouse Falls in Washington while hiking and sightseeing with his girlfriend on May 29, 2017. His body was recovered by rescue personnel the next day. 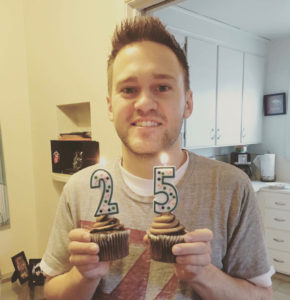 Cade Prophet, 25, celebrating his final birthday. Prophet fell to his death at Palouse Falls in May, 2017. Photo courtesy Dorothy Prophet.

In the months following her son’s death, Prophet began looking into how it happened. What began as a few questions slowly morphed into her campaign to convince Washington State Park officials to implement changes to increase the safety of Palouse Falls State Park — changes she thinks are crucial to avoid another fatality in the future.

“I started looking at this problem and said, ‘This doesn’t work, we have to fix this,’” Prophet said. “I found an article from 2015 when the fire district had warned the parks department that this was a death trap, that they were responding to a lot more emergency calls. If they knew that in 2015, why did my son die in 2017? That lit a fire under me.”

The park is located two hours southwest of Spokane, and features a 198-foot waterfall that formed as a direct result of the ice age floods more than 13,000 years ago. The falls has seen an increase in popularity after it was named the “State Waterfall” in 2014. In just over a decade, the annual visitors to the park spiked from 46,000 to 200,000.

With the increase of visitors, the park has also seen an uptick in fatalities and injuries due to falls from the cliff above the waterfall, as well as drowning deaths in the pool below.

“We had quite a few injuries in 2015,” said Virginia Painter with Washington State Parks.

Painter said of 11 emergency rescues that year, five had to be flown out by medical aircraft.

“These are terrible things,” Painter said. “The deaths are really hard to deal with. Every time something happened, we get staff out there looking and asking how it happened and where it went wrong.”

Since 2016, four people have died at Palouse Falls. In May 2016, James Hopkins, 22, drowned while swimming with friends. In May 2017, Cade Prophet slipped and fell off the cliff above the falls. There were two fatalities reported in 2018: Isaac Engell, 23, drowned while swimming in the turbulent water below the falls in April, and most recently, Noble Stoneman, 25, fell to his death from the cliffs in May.

Painter said changes were implemented in the past as a result of these incidents. Portions of the park were closed off at one point. 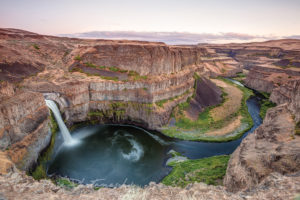 “In our experience, closing something off doesn’t make an effect on a person who wants to go there,” said Painter. “Last time we put up temporary fencing and people complained. They just went right over it, saying it blocked their access.”

Last month, Washington State Park officials traveled from Olympia, Wash., to Sandpoint to meet with Prophet and hear her concerns. Chief among Prophet’s concerns were that signage was not aggressive enough to stop wayward hikers from going onto “social trails” that lead to unsafe vista points.

“People see these trails where you can see it’s been worn down, and they think that’s a safe way down to the falls,” she said. “It’s not, that rock is slippery, and can break easily. I see pictures of parents standing on the edge with their kids in their arms and it terrifies me.”

“All along we have been making changes on signage and trying different things to impress upon people the potential danger,” Painter said. “We’re very well aware that the way these primitive paths are worn in everywhere, they’re on slopes, they cut across angles. It’s really hard packed dirt with light dry dirt on top – very slippery.”

Prophet said she approves of new signs have been installed along the edges, as well as a fencing system that corrals hikers to a point where they must read the warning signs before entering the view area.

The fencing will “discourage people from going to that area” which leads to the cliff edge, Painter said. “We’re hoping that somebody will make a decision to save their lives or keep them from harm. … Our staff deeply feels compassion and concern for these people. We want them to be safe.”

One sign reads, ‘Warning, people have died here, we want you to live, stay back from the cliff edge.”

While driving into the park, an electronic reader board flashed the messages, “Stay far from cliff edges,” “Danger 4 recent deaths,” and “Water currents deadly.”

“That’s a pretty strong message,” said Painter. “The ‘4 recent deaths’ is the strongest. It’s so important to stress that this is a beautiful place to go, but please mind the signs. The dangers are real.”

“They’ve done an awful lot,” Prophet said. “It’s a vast improvement from what it had been.”

While she appreciates the improvements by Wash. State Parks, Prophet sees two issues that still need to be addressed. 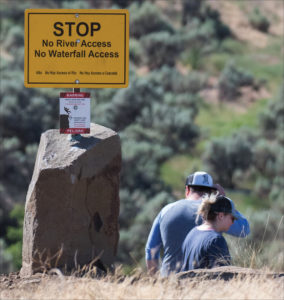 One of the recently installed signs, with hikers ignoring their message in the background. Photo by Dorothy Prophet.

One is the primitive trail leading to the cliff edge where Prophet’s son fell to his death. While a sign exists a short distance before the edge, a trail still can deceive hikers into thinking it leads down to the water. Prophet wants a sign placed at the mouth of that trail to further deter anyone from entering the area.

The other problem area Prophet sees is the pool below, where two of the recent fatalities occurred. Currently, there is only a small sign with a graphic of a swimmer with a “not” symbol over it. Prophet thinks this area needs to be marked more clearly.

“The reality of what happens at the park when there are guests or visitors there versus what (Washington State Parks staff) thinks happens, there’s a disconnect,” Prophet said. “If they would watch what visitors do when they’re actually at the park, to sit there for an hour or two and watch as I have, they could see where they were lacking in their efforts to warn people.”

In the meantime, Prophet will continue to communicate with park officials to see that the waterfall gives everybody a chance to be as safe as possible.

“I don’t want another mother to ever get that phone call,” she said. “If I can help somebody else, even if I’m not aware of it, if one mom doesn’t get that call that her child is dead, I’ve done something good. I just can’t ignore a problem if I’m aware of it.”