By early 2020, the Idaho Mythweaver will be completing its 30th year working with Idaho’s six Indian tribes on cross-cultural arts, humanities and media projects. The nonprofit organization, headquartered in Sandpoint, is working on the final phase of its last project called Native Voices. 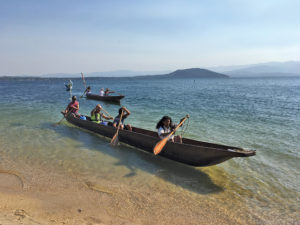 “It brings us full circle beginning with our very first project called Idaho Keepers of the Earth, a documentary series for public radio,” said co-founder and media director Jane Fritz, the original interviewer, a professional audio producer and graduate of Lewis-Clark State College. “The original recordings of oral histories and traditional stories are being reformatted into digital files and transcribed. No copies exist, and because of their age, they are very fragile,” she added.

The cassette tape recordings gathered between 1989 and 2003 for various public radio and media projects were produced primarily with elders, many of whom are now deceased. Of the 100 recordings in the Mythweaver’s archive, nearly half deal with the Nez Perce Tribe. Once these are digitized, the files and transcriptions will be given to the Tribe’s cultural resource department, as well as KIYE Nez Perce Radio for cultural programming. Digital copies, as well as the original tapes, will be housed at the Nez Perce National Historical Park Archives for long-term access to tribal members, family members and scholars.

“We have prioritized the Nez Perce recordings since they are the largest part of the archive,” said Fritz. “We worked with the Nimiipuu the longest — 13 years,” she said. “There are stories about fishing for salmon at Celilo Falls, told by the late Rick Ellenwood, as well as traditional Coyote stories about the creation of the falls, as told by Mari Watters and Allen Slickpoo, both deceased.”

The collection also has many stories about the Nez Perce War of 1877, which ended with the surrender of tribal leader Chief Joseph at Bear Paw Mountain in Montana Territory.

“I interviewed the late Horace Axtell walking through the Bear Paw Battlefield, just the two of us, on the last day of the 125th commemoration. He talked about his ancestors with such respect and sadness, especially those that had died there,” Fritz said.

Phase III of the preservation work continues through January 2020, with the following two months to be spent preparing the completed digital files and transcriptions for distribution to the tribes as well as to institutional archives in the region.

In order to complete the final work, the Mythweaver still needs to raise around $6,200 toward its Phase III budget, which is part of the overall $64,200 cost of the project that began in mid-2017.

“We are in our final fundraising push, and are so close, but we need that last show of financial support to complete it,” said Fritz.

The Mythweaver has received grants from several foundations, large donations from the business community, and smaller individual gifts from many individuals through their GoFundMe site called “Native Voices: Preserve Recordings.”

The budget for the final phase of the Native Voices project totals $15,990. The group recently received a $2,500 grant from the Idaho Humanities Council; $1,000 from the former Sahlin Foundation principals in Coeur d’Alene; $1,000 from Waterfront Property Management in Sandpoint; and $500 from two anonymous individuals. The organization has also received a generous pledge of support in a matching grant of $5,000 from Idaho Forest Group, one of the Mythweaver’s major supporters, once additional funds are received.

Those interested in donating can do so at the Idaho Mythweaver Facebook page or by mail to P.O. Box 2418, Sandpoint, ID 83864.

Digitized and original tape recordings from the other five Idaho tribes will be gifted to the respective tribes. Materials pertaining to the Kalispel, Kootenai and Coeur d’Alene tribes will be given to the Museum of Arts and Culture Plateau Center Archive and the Idaho State Historical Society Archives will be the recipient of the Shoshone-Bannock and Shoshone-Paiute recordings.