It took a little over four years for KRFY to get from a group of friends talking about the idea of community radio in North Idaho to flipping the switch on, and beginning it’s first on-air broadcast in late January, 2011. 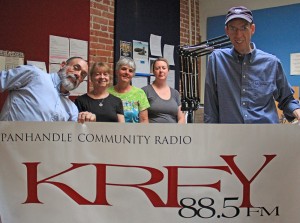 In a small town whose identity is, in a large part, identified by its sense of community, Panhandle Community Radio, or KRFY Radio (88.5 FM) is in a unique position on the local airwaves. With today being National Radio Day, the Reader took the opportunity to sit down with some key members of the station to talk about the evolution and future of community radio here in the 7B.

The concept of community radio is a little different than the standard commercial radio process. As opposed to being financed strictly by commercial advertisers, community radio is sponsored by “underwriters”, individuals and businesses that believe in the concept and help support the financial needs of the station through grants and contributions. The same load is also carried by individual contributors, or “members.” They’re a big part of the heart of community radio, supported by the same people it serves.

“Our goal is to be aware of our community so we can be the voice of our community,”  said Station Manager Suzy Prez. “We needed to find a group of businesses and individuals willing to put down some money as a promise. Not only financially, but a group of volunteers came forward and we started putting things into place. A lot of people stepped forward.”

Board member Charlie Parrish, who was key in initial financing and seed money, agreed. “We were and are a different voice in the community. The number of underwriters has increased significantly in the last couple of years.”

With a song library of over 80,000 tunes, the programming is constant and varied, ranging from politics and jazz in the mornings to weekend gospel, reggae, blues and garden shows. Local events, notables, musicians and artists are often featured in interview formats and live performances.

Showcasing 7 original shows that are produced locally, original content is always on the drawing board. Among these shows is “Thinking Outside the Box”, hosted by Ken Casler. “The show is about ways the community can hear and take ideas from around the world and possibly use them to benefit our community.” said Volunteer Broadcaster Jackie Henrion, host of the Sunday evening show “Songs, Voices and Poems.” Jackie is very excited about the potential of the station.”To paraphrase Emily Dickenson,” she said, “we dwell here in possibility.”  Another show, “Between the Notes” features live interviews with local and passerby musicians playing live and talking about their journey.

A real opportunity for the community to help support the efforts of KRFY is coming together in October, when the station will be hosting an online auction as a fundraiser. The first week of October is the kick off of the procurement period for donations of items and services to help raise funds to keep the station going strong. The online auction itself runs from the 17 through 25. A fundraising party is being held at the Idaho Pour Authority on October 21 where supporters will have an opportunity to participate and bid for items online and to help fund the continued success of community radio in Sandpoint.