Not long after Donald Trump won the 2016 presidential election, Sandpoint resident Travis Thompson started prepping to attend the inauguration. A self-described conservative associated with several motorcycle social groups, Thompson worked with the National Park Service (NPS) to secure permission for the thousands of bikers expected to travel to the National Mall in Washington, D.C. Thompson described the process as putting together a puzzle with some pieces that just don’t fit. 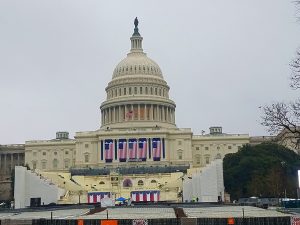 The U.S. Capitol prepares for the inauguration of the 45th president. Photo by Cameron Rasmusson.

“There will be plenty of groups [in Washington] that have strong, differing views,” he said.

Thompson said he and the NPS have the same priority: to ensure the transition of power is a peaceful one by creating buffers between opposing groups—but it’s a task easier said than done.

A war of words is already raging on social media, with the bikers’ Facebook group 2 Million 2 DC declaring it will “stop the libtards from ruining the welcoming event,” while Act Now to Stop War and End Racism intends to take to the streets for “a real political revolution” under the hashtag #InaugurateTheResistance.

Thompson said the bikers he knows aren’t violent or aggressive. They are “good, salt-of-the-earth” people unfairly branded as criminals when, really, they organize around shared veteran status or church affiliation. However, he added, good intentions have yet to mend the bitter divides carved out during the 2016 election cycle, prompting security concerns for the inauguration. The New York Times reported three dozen security agencies have been added to what will already be a strong law enforcement presence at Trump’s swearing-in, which will take place Friday, Jan. 20 in D.C.

Meanwhile, Idaho Republican Party Chairman Steve Yates is looking forward to the festivities. He had already been planning to travel to the capital for the GOP National Committee winter meeting regardless of the outcome of the election.

“It certainly would be an entirely different atmosphere if we had lost,” Yates said.

It would, but victories in the White House and both chambers of Congress have emboldened Republicans. Yates said he anticipates the repeal and replacement of the Affordable Care Act, a reduction of business regulations and a new approach to national security and immigration.

“We’ll also have an administration that speaks in ways very respectful of the Tenth Amendment and state sovereignty,” Yates said.

The all-Republican Idaho congressional delegation has also spent the past several weeks preparing for the new administration. U.S. Sen. Jim Risch (R-Idaho) has either met or talked privately with several of Trump’s cabinet members to establish working relationships.

“The legislative and executive branches have an exciting opportunity to work together as a unified government under the Trump administration,” said Risch Press Secretary Kaylin Minton. “Sen. Risch looks forward to advancing priorities important to Idahoans, such as reforming our broken regulatory system, tax code and addressing the costs associated with health care.”

Rep. Raul Labrador (R-Idaho) was briefly considered for the position of secretary of the interior but, on Dec. 15, Trump announced he had selected Rep. Ryan Zinke (R-Mont.) for the role. Nonetheless, Labrador Press Secretary Dan Popkey said his boss has established a good rapport with Trump during a series of vetting interviews.

“United government presents an historic opportunity to keep the promises Republicans made to get elected, including reducing our crushing national debt; repealing and replacing Obamacare; immigration, tax and regulatory reform; and giving localities and states more say in the management of federal lands,” Popkey said.

The Women’s March on Washington, set for Saturday, Jan. 21, will shake up the political mix in the city even further. A reaction to Trump’s misogynistic and racist statements, the march will be attended by people from every corner of the U.S.

One marcher is Sandpoint resident Krista Eberle, who is traveling to Washington with her daughter. She said she was astonished by Trump’s rhetoric and policy proposals and disheartened by the outcome of the election.

“I’m going in part for myself, but it’s not just about me,” Eberle said. “I’m worried about my current and future grandchildren.”

While she opposes Trump, Eberle also wants to engage with Trump supporters to learn how they came to their decision.

“I think we’re all fearful, and we’re fearful of the same things, but we see them differently,” she said. “I’d like to have a dialogue.”

It’s a desire echoed by Thompson. He wonders where the respect has gone between political rivals and, while he believes Trump’s election represents a positive cultural trend, he thinks people put too much stock in the presidency.

“It seems like we live and die by who the president is, and that’s a mindset that needs to change,” he said. “Our attention needs to go to the legislative branch.”

As for Yates, he said he’s too familiar with the experience of being disappointed on previous inauguration days. In particular, he recalled being in Washington, D.C. when President Barack Obama was sworn into office in January 2009. Eight years later, as the capital braces for what may be the most contentious inauguration in modern history, Yates said he hopes some Trump opponents will embrace unity.

“Inauguration is an event for the country, not for an individual and not for a political party,” he said. “Peaceful transfer of power is one of those great American miracles.”