Musings on the Media

With the Fox in the White House, the fourth estate is in shambles.

As products of the enlightenment, our founding fathers established our democratic republic on the bedrock of reason. They believed that a free press (sometimes referred to as the fourth estate) would serve the public by providing a check on politicians and empower citizens to make informed decisions.

But now, that ability to critically evaluate our government has been gravely undermined due to the lack of a healthy marketplace of ideas or civil discourse.

The polarization we find in our politics today is the result of two forces – political and commercial. Politicians bent on consolidating political power combined with the profit motives of privately held news organizations have fueled a toxic atmosphere where media organizations are accusing each other of peddling misinformation and our own president labels the media the “enemy of the people.” 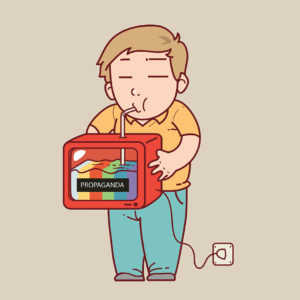 Central to this dysfunctional information system is Fox News, which has evolved as the closest thing our country has ever had to a state propaganda machine.

Things started to go downhill after President Reagan eliminated the Fairness Doctrine, which was a federal policy requiring broadcast media using the public airways to devote some of their programming to controversial issues of public importance and to air opposing views on those subjects.

It also required media outlets to allow candidates a chance to respond to endorsements of their opponents or personal attacks. The repeal of that doctrine is largely credited for the rise of cable news programs that lack balanced reporting.

The devolution of a civil and balanced news media was exacerbated by the rise of the internet, which spelled the slow death of newspapers and the dwindling number of daily beat reporters and investigative journalist who unearth the facts that inform our news. (I am one of those casualties – having worked at the Spokesman-Review newspaper for 15 years when that paper had the resources to maintain offices in Coeur d’Alene, Pullman, Boise and Sandpoint.)

This amplified internet’s echo-chamber effect, which is the experience of having our own views — sometimes misinformed — constantly reinforced by a select few sources, such as blogs, Facebook pages and online news outlets and ads.

Now we live in a world of competing news outlets with radically different ideologies and points of view — with a handful that occupy the middle. Many independent measures of media bias place traditional media outlets, such as the Washington Post, Wall Street Journal and New York Times, along with National Public Radio and PBS — somewhere in the middle of the spectrum of bias, while the cable news shows — Fox News and MSNBC occupy the right and left respectively.

And while independents and Democrats tend to go to a variety of news sources, a greater percentage of registered Republicans (40 percent) almost singularly rely on Fox News for their information, according to a 2017 study by the American Press Institute. In contrast, the study found that 30 percent of Democrats turn to CNN more often than other sources.

When President Obama was in office, Fox News behaved more like a watchdog. Now, Fox News is part of the power structure. Last summer, Trump appointed Bill Shine his deputy chief of staff. Shine is the former co-president of Fox News and is close friends with Sean Hannity, the prominent Fox News host.

Several journalists have reported that the president talks regularly with key people at Fox News, especially Sean Hannity. The president is reportedly an avid fan of Hannity’s hour-long show, recording it to watch later if he can’t catch it live, reports Gabriel Sherman, who covers the White House for Vanity Fair. Trump then regularly tweets on what he hears on Hannity’s show or “Fox & Friends.”

While certain Fox personalities have excellent access to the White House, the rest of the press corps is largely left in the dark. The White House has abandoned the practice of daily press briefings. Briefings are now held once very few months. Meanwhile, Shine has removed at least one journalist from the White House Press Corps for asking tough questions.

The Washington Post has reported that White House advisors call Hannity the “Shadow Chief of Staff,” but Hannity has no public policy training or experience. He’s a high school graduate whose professional career has been in talk news radio and television. Cable news and talk radio rely on ratings, and rating go up with outrage, fear-mongering and controversy.

This is in sharp contrast to the view of the press held by U.S. Supreme Court Justice Louis D. Brandeis, who said, “It is the function of speech to free men from the bondage of irrational fears.”

Hannity has devoted his professional career to getting a rise out of people. The kind of radio and television that Hannity delivers is the kind that propagates polarization, tearing our nation’s diverse fabric apart. Fox News used to cloak itself with the motto “Fair and Balanced,” but that motto, along with the pretense, was abandoned in 2017 — even though Fox News hosts still try to paint themselves as more credible than their rivals.

“‘Fox & Friends’ was a fun show, but it was not a news show,” former Fox co-host Alisyn Camerota told The New Yorker magazine recently. “It regularly broke the rules of journalism,” and culled “far-right, crackpot websites” for content, she told the magazine.

Yet, the level of influence the network has is astounding. For instance, when the Trump administration favored the criminal justice overhaul bill that was pending in Congress last fall, the White House asked Fox to issue a statement in favor of the bill in order to get Republicans in Congress on board, according to the New York Times.

Because Fox has so much power to influence the base of Republican voters, Republican Congressmen seem loath to get on the wrong side of the network’s editorial leanings.

Unfortunately, it appears that things are about to get worse before they get better. Russian bots and internet trolls are waging cyberwarfare on our country by planting phony news stories on social media, hacking networks, and attacking the foundation of reason that guides our government.

Instead of uniting us against that common enemy, Trump, Fox and the fringe news media play into Russia’s hands, amplifying unsubstantiated reports that feed a narrative of a country torn asunder and on the verge of chaos.

For Fox, it’s always been about the bottom line. The Murdoch family — which owns Fox — has become one of the richest in the world by fanning the flames of fear and hatred. (They are doing the same in Australia with their Sky Australia network and in Great Britain with their tabloid newspapers.)

When you see the term “libtard” pop up on a Facebook feed, you are witnessing the fruits of our current media climate. When you hear our president calling the press the “enemy of the people,” can you hear the seismic shifting in the foundations of our democratic principles?

Journalism does have a few rules. Three hard-fast ones are to 1) tell the truth, 2) check your sources (and don’t rely on just one source) and 3) be fair and balanced. If we all try to live by those rules, we might just survive democracy’s dark times yet.

Susan Drumheller, a long-time North Idaho resident and graduate of the University of Missouri School of Journalism, is a former reporter/editor who now works as a grant writer.