Many people have the misconception that those who take issue with Moscow pastor Douglas Wilson’s Christ Church, Logos School, and New St. Andrews College (NSA) are condemning their religious beliefs. For me and many others this is simply not true.

In December 2002, I invited NSA faculty and students to attend the regional American Academy of Religion meeting, which took place on the University of Idaho campus in May 2003. (One year 40 percent of the papers were presented by faculty from conservative evangelical schools.) Then NSA President Roy Atwood, however, said that they had “better things to do,” and our relations, fueled by heated debate about Wilson’s booklet Slavery As It Was, got worse and worse.

When over 1,000 people signed the full page ad “Not in Our Town” in the Moscow-Pullman Daily News in December 2003, the issue was not evangelical theology; rather, it was Wilson’s slavery booklet, in which he and his co-author Steven Wilkins states: “There has never been a multi-racial society which has existed with such mutual intimacy and harmony in the history of the world” (p. 24).

Wilkins was a founding director of the League of the South (LOS), which has been declared a “white supremacist hate group” by the Southern Poverty Law Center. LOS founder Michael Hill proposed that an independent neo-Confederacy of fifteen states would have the duty to protect the values of Anglo-Celtic culture from black Americans, who are “a compliant and deadly underclass.”

The LOS organizes public protests in conjunction with the Council of Conservative Citizens, whose website decries “negroes, queers and other retrograde species of humanity.” In his own manifesto Charleston shooter Dylan Roof stated that, after he started reading the CCC website in 2012, he “was never the same.” He was particularly drawn to “pages upon pages of black on white murders,” which convinced him, draped in the Confederate Battle Flag on his web posts, that he had to start a race war against all black people. 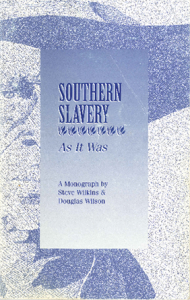 “Slavery As It Was” booklet, by Douglas Wilson and co-author Steven Wilkins.

Two University of Idaho history professors took time from their busy schedules to refute the slavery booklet paragraph by paragraph. It was later discovered that 20 percent of the booklet was lifted verbatim from Robert Fogel’s and Stanley Engerman’s Time on the Cross.

Tracy McKenzie, professor of history at the University of Washington and a member of Wilson’s Christ Church in Seattle, pleaded with Wilson to repudiate his work; but, instead Wilson took on McKenzie, an expert on the ante-Bellum South, and wrote new book Black and Tan in defense of his discredited views.

In an interview with the Spokesman Review (Oct. 22, 2007), Wilson admitted that “Confederate flags have adorned office and school walls at times.”  At a 2005 picnic attended by members of Wilson’s organizations, the band Potatohead refused to entertain when they saw the Confederate flag prominently displayed.

In a response to an earlier version of this article, Wilson said that students at Logos School were simply reenacting Civil War history, but does that mean that his people at the 2005 picnic divided up for war games, too?  The band Potatohead did not see any Union flags for this alleged historical balance.

Moscow’s intoleristas proudly wear the name badge Wilson has given them, and we now have big name allies all across the nation. Walmart, E-bay, Sears, Target, Etsy, and Amazon will no longer sell Confederate flags and memorabilia.  Although they have received last minute rush orders, major flag manufacturers will no longer produce a flag that divides people along racial lines.

Alabama’s governor has ordered that four Confederate flags be removed from his State Capitol. A bill has been introduced in the Mississippi legislature to excise the Rebel Flag that stands prominently in the upper left corner of this state’s flag. Unfortunately, South Carolina’s legislators will have to muster a two-third’s vote to bring down this symbol of hate and bigotry that flies high over their Capitol. In stark contrast, the state flag and Old Glory flutter at half-mast.

In a 2007 essay “Take Down That Flag” in the Christ Church journal Credenda Agenda, Douglas Jones, Wilson’s former right-hand man, argues that the defeat of the Southern forces was obviously a sign of divine wrath. Instead of repenting, neo-Confederates boast about “their proud legacy and dwell on the sins of their accusers.” Jones declares that they should burn their flag and wear the ashes as a sign of repentance. How many neo-Confederates among us are ready to accept Jones’ challenge?
Nick Gier of Moscow taught philosophy and religion at the University of Idaho for 31 years.  Read all of his articles about Wilson at www.webpages.uidaho.edu/ngier/Wilson.htm.