With a stack of resolutions and endorsements in hand, we (Phil Hough, Brad Smith and Kate McAlister) recently traveled to Washington, D.C.,  to meet with the Idaho and Montana congressional delegation. We returned with encouraging signs that they are listening to our communities’ call for action on the Scotchman Peaks. 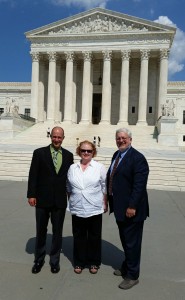 Brad Carlson, Kate McAllister and Phil Hough in front of the Supreme Court in Wash., D.C.

Sen. Jim Risch, Sen. Mike Crapo, Rep. Raul Labrador and their staff members are hearing from many people in the community about the Scotchmans. The vast majority of what they hear is very positive. Their Montana counterparts, Sen. Jon Tester, Sen. Steve Daines and Rep. Ryan Zinke are following this closely too.

Just before our trip to D.C., the Missoulian, Spokesman-Review and Bonner County Daily Bee all wrote editorials supporting the Scotchman Peaks.  Montana Gov. Steve Bullock recently weighed in with a glowing endorsement. Important voices from a wide range of community, civic and business leaders have been calling and writing the congressmen.

Our visit to D.C. this time was to present a community proposal for wilderness.  We are being heard!

Risch was especially supportive.  Right now he is working on legislation to designate the Boulder White Clouds as wilderness. He is making good progress on that and wants to finish it before taking on another wilderness bill. But he acknowledged the diverse support for the Scotchmans and sincerely suggested that we come back and talk with him again after the Boulder White Clouds bill is done.

At the very end of the hearing he changed subjects and had this to say about the Scotchman Peaks:

“For those of you who are interested in looking to the future. Here in the audience today we have people representing the Scotchman’s Peak area of North Idaho. Another, probably the next, candidate in Idaho. It may be in my fourth or fifth term in this job, I don’t know. I hope you don’t have to wait that long, but there is no doubt that there will be movement. And they are, I wanted to compliment them right now. They have seen and picked up on the collaborative method by which these public lands issues have been resolved in Idaho. They have been moving forward in that regard. They are making substantial progress and, indeed, they have an impressive list of people who are supporting that work in that regard and so this committee will in all likelihood in the future be seeing them.”

These unscripted comments turned a lot of heads in the room, including ours. Risch publicly confirmed the support that he had shown to us in our meeting the previous day.

The timeline for the Boulder White Clouds passage (and our return trip to D.C.) is uncertain, but we are most likely talking about months, not years. In the meantime, these encouraging words from Risch continue to echo in the halls of Congress, as well as in our community.

To find out more about the Scotchman Peaks visit: www.ScotchmanPeaks.org