Right now you’re probably seeing abundant flowers, but one brilliant orange tends to stick out from the billows of pinks, whites, and purples. Papaver orientale, the Oriental poppy (not Papaver somniferum, the annual opium poppy) is the bright stand out. With huge bright orange flowers that can stand over three feet tall, large hairy leaves like soft thistles, and a possible spread of a three-foot diameter, this plant screams ‘Look at me!” 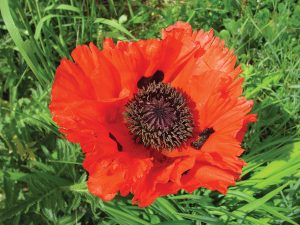 Oriental poppies spread slowly and persist for years, even without care. They like full sun, and average, well-drained soil- they will rot in winter if water stands. They are pretty drought resistant, as long as they have spring rains. Until most perennials, they can go years without being divided. Bugs don’t bother them and I’ve never seen disease on them, even in one site where they got overhead watering every single day.

These poppies do have one drawback: they are summer dormant. After their spring bloom is over, the leaves will wither, look terrible, and die. No worries; the plant itself has not died! Pull or cut the dead foliage off, and plant some annuals in the space around the poppy crown. Keep watering it, and in bit a small tuft of new leaves will appear- most likely after the hottest part of summer is over. If summer is long enough and you keep watering, you may be rewarded with a bloom or two in late summer. Come autumn, leave that tuft of foliage in place as it will provide protection for the crown. In spring, those leaves will die off as the new growth appears. In very cold winters with no snow cover, those little leaves will frequently die off without it harming the plant.

This plant is considered difficult to propagate because it doesn’t like to have its tap root disturbed. If you transplant it, you will almost certainly have baby ones showing up where you thought you got it all dug up – while the plant you moved will sulk or die. If possible, do any transplanting during the plants summer dormant period.

While the tap root doesn’t like to be disturbed, the smaller roots are quite happy to grow into new plants- which is why baby plants show up where you moved one from; the bits of root that got left behind are making new crowns. This is my preferred way of propagating Oriental poppies- taking root cuttings. You can dig down beside the crown, and cut off some roots anywhere from the size of a pencil lead to that of a pencil itself. Cut these into two-inch segments, lay horizontally on a bed of potting soil, and cover with more soil. Soon tiny leaves will appear at the end of the cuttings. This way you will get plants identical to the parent plant; while the plants grow easily from seed, they don’t always look like the parent plant.

The species is frequently described as ‘red’ but it’s really bright, saturated, dark orange. For true red, get ‘Beauty of Livermere’. They are also available in white, salmon pink, a neon pink (‘Watermelon’), white with orange edges (‘Picotee’) and even purple (if you can, get ‘Heartbeat’ or one of the other newer purples; ‘Patty’s Plum’ was the original purple but it doesn’t bloom very well). Well, it’s a sort of brownish purple, but it’s still beautiful and unique. The photo above is of ‘Turkenlouis’, with fringed petals instead of the standard smooth edges.

The brilliant color of the Oriental poppy can make it hard to find garden partners for it. The blue flowering Centaurea montana (perennial bachelor’s buttons) blooms at the same time as the poppy and is a stunning counterpoint. It also can be coaxed into a late summer rebloom if cut back after the main show. Catmint (not catnip), Nepeta ‘Walker’s Low’ is a lavender purple; many of the Veronica’s bloom now- ‘Royal Blue’ is a true blue. All of these should be planted in front of the poppy as they are shorter. If you prefer to give the poppy a partner in the same color family as itself, pair it with some dark red bearded iris. This is especially effective if they are both planted on the west side of your favorite viewing point; the long rays of the setting sun will shine through their petals and they just catch fire. It’s a very brief show- Oriental poppies only bloom for a couple of weeks- but it’s amazing. The softer colors of poppy, of course, are easier to site in the garden, and while they aren’t traffic stoppers, they are very beautiful.

TIP OF THE WEEK:

To use Oriental poppies as cut flowers, cut just as the flower is opening, quickly sear the cut end with a lighter, then plunge the stems into cold water up to the flower and leave for a few hours before putting in a vase.