Long distance swimmers span the 34-mile length of the lake

Right from the beginning, Lake Pend Oreille was trouble.

Standing near the lake shore at 5 a.m., endurance swimmers Nancy Steadman Martin, Christie Ciraulo, Jenny Cook, Tracy Grilli, Karen Einsidler and Roni Hibben were prepared for their latest feat: a swim across the length of the Pend Oreille. With decades of swimming experience between them, they were the Mighty Mermaids, a group of female athletes over 50 years of age. And they were more than prepared for this latest test—that is, if their equipment held up.

Leave it to technology to fail you at a crucial moment. Just minutes away from leaving their starting point at Buttonhook Bay Wednesday morning, the propeller on a support boat failed. With no other options, the support team had to rush to Coeur d’Alene to pick up repair parts. The Mighty Mermaids’ swim would have to wait. But just as theater demands that the show must go on, so too would the swim take place, delays be damned.

At 34 miles long, Lake Pend Oreille is an intimidating body of water for any distance swimmer. Last year, Elaine Howley swam into the history books when she became the first person to complete a length-wise solo swim of the lake, charting a time of 20 hours, 25 minutes and 55 seconds. The achievement was greeted by the Sandpoint community with great fanfare and left a lasting impression on the Boston-based swimmer. 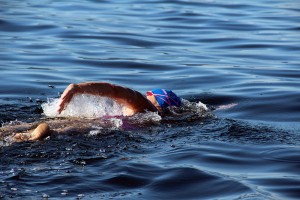 Indeed, it was Howley who recommended the Mermaids take on the swim for themselves. With the team looking for its next challenge, the allure of a North Idaho “working vacation” soon won the day.

The Mermaids brought with them a wealth of experience. They won their division in the Trans Tahoe Relay twice as well as  the Lake Travis Relay in Texas. They also set age group speed records swimming around Manhattan in New York City; the Catalina Channel; the length of Lake Tahoe and across Lake Winnipesaukee in New Hampshire.

They had the athletic chops for the undertaking, no doubt. But they still needed a support crew, and Howley was happy to recommend one. Among the team: Eric Ridgway, an experienced endurance swimmer himself and the founder of the annual Long Bridge Swim; Sunny Blende, a sports nutritionist and Randy Hixon, who manned the team’s support kayak.

“Getting the support team together is always one of the toughest things, so that coming together so early was great,” said Einsidler.

The support team proved its worth right from the first setback at 5 a.m. When the boat lost its propeller, Ridgway dove into the chilly morning waters to retrieve it, while others arranged for a replacement. Meanwhile, the Mermaids settled into an eight-hour wait while the new parts were delivered and installed. 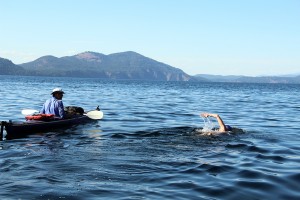 “Despite an eight-hour delay, I didn’t hear one negative word from them the entire time,” Ridgway said.

The delay came with its share of tertiary setbacks. Most importantly, it meant that by the time they finished, the team would have been awake for a full 24 hours. Also worrying was that rather than finishing at City Beach at a comfortable 7 or 8 p.m., they’d land upon its shores between 3 to 5 a.m., enduring the colder night waters along the way.

The delay left the team with dwindling food and water supplies toward the early evening. Fortunately, supporters Doug and Lorraine Evans sped out in their boat with sandwiches and water—and two dogged Sandpoint Reader reporters—to meet up with the team.

The Mermaids handled the swim one by one in a relay, each taking an hour. When one reached the end of their time, her relief took her place in the same spot. The relieved swimmer would then take her place at the support boat.

If the delay brought its share of disadvantages, Mother Nature proved kinder. The air was warm but not uncomfortable, while the water temperature hovered between the high 60s and low 70s. The Mermaids calculated their swim date to achieve a happy temperature balance, and the planning paid off. 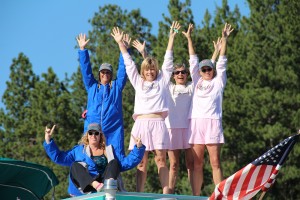 Five out of the six Mighty Mermaids celebrating on the support boat (Roni Hibben was swimming at the time of the photo). Photo by Ben Olson.

Perhaps motivated by the pleasant conditions, the Mermaids charted impressive swim speeds, averaging two and a half miles per hour. Ridgway learned their athletic caliber when he hopped in the water to take in a little swimming for himself.

“They just left me behind,” he said. “These women are very fast swimmers.”

Lake Pend Oreille is probably not the Mighty Mermaids’ ultimate achievement, considering their impressive history as a team. It’s far from their last as well. The team is building its annual challenges toward a 2018 swim of the English Channel. By that time, all members will be over the age of 60, and what’s more, it will complete their Open Water Swimming Triple Crown: 21 miles  across the English Channel between England and France, 21 miles across the Catalina Channel in Southern California and 28.5 miles around the Manhattan Island in New York.

While the team members no doubt have many amazing sights and waters ahead of them, there’s also no doubt that Sandpoint will occupy a special place in their hearts. More than any other place they’ve visited, they’ve enjoyed a level of support and warmth from residents that has impressed them deeply.

“We simply haven’t had community support like this ever before,” said Grilli.