A look back at one of the worst fire seasons in North Idaho, rivaled only by the Big Burn in 1910

As hundreds of thousands of acres burn across the surrounding regions this summer, the areas directly surrounding Sandpoint have been fairly fireless. Though smoke lingers, the gray skies can be blamed on terrible fire seasons in Montana, Washington and Canada. Though it’s not over, the 2017 fire season has been mild.

But exactly half a century ago, Sandpoint was seeing a fire season rivaled only by the Big Burn in 1910. The 1967 fire season, the year of the memorable Sundance Fire, is a fire season that “anyone around back then will remember,” said Chair of the Inland Empire Chapter of the Society of American Foresters Bill Love. 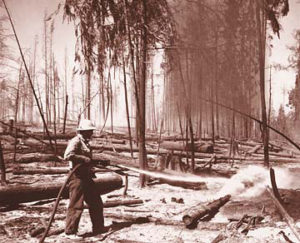 In the spirit of remembering such a fire-impacted summer, when two men lost their lives fighting the Sundance Fire, Love said several entities are teaming up to host a commemorative event this weekend. Those helping with the event include the U.S. Forest Service, the Idaho Department of Lands, the Society of American Foresters and museums in Sandpoint, Bonners Ferry and Priest Lake. The event will be held Saturday at a U.S. Forest Service bridge 13 miles from Highway 95 on Upper Pack River Road from 10 a.m.-1 p.m.

The lightning-caused Sundance Fire burned nearly 56,000 acres, able to burn a square mile of timber in under three minutes. It ignited near the Sundance Mountain Lookout tower overlooking Priest Lake, and strong winds on Sept. 1 forced the flames across the Selkirk Divide and into the Pack River drainage.

“Our primary emphasis (at Saturday’s event) will be Sept. 1, 1967 — the day the fire made that nasty run,” he said. “The strong winds that occurred (that day) caused the fire to spread so quickly and cover so much area. The fire blow-up phenomena had been somewhat of a mystery.”

The event will be a bit of a history lesson for attendees, Love said. People will be treated to presentations about the weather conditions that led to the Sundance Fire, and will also be taken on a short walking tour to see results of forest restoration efforts following the fire. He said that while most people know that the dry conditions of 1967 contributed to the numerous fires across the panhandle that year, they might not realize that the many years without large fires over the previous decades created a perfect setting for such a huge fire event.

“There was a period of years where the fuels were building up that were setting the stage something as large as the Sundance fire,” Love said.

Aside from the presentations and walking tour, Love said he can’t wait to hear the firsthand accounts from the people who lived through the summer of 1967 in North Idaho.

“The most interesting aspect is going to hear the people involved in the fire tell their personal stories,” Love said.

Apart from the main event Saturday, there will be a private gathering on Friday for the families of the men who died in the Sundance fire: Luther Rodarte and Lee Collins. The Forest Service is placing a plaque to commemorate the men’s sacrifices.

“As far as we know, (the families have) never been together,” Love said. “Fifty years later and they share this common grief, so we just want it to be private time.”

Ginger Ward, daughter of fallen dozer operator Collins, will be one of the family members in attendance at the private gathering Friday. She said her initial reaction when hearing about the plaque dedication was one of appreciation.

“I’d like to thank everyone for their hard work and support,” she said.

Hosts of the Saturday event request that attendees provide their own transportation to the event site, as well as bring food, beverages and lawn chairs.