A bill tacking on additional restrictions and requirements to the Medicaid expansion approved by Idahoans last November is stalled in committee. 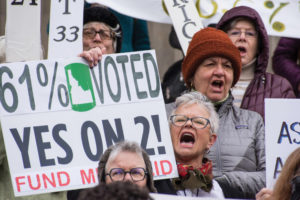 The Idaho Press reports that the Senate Health and Welfare Committee voted 7-2 Wednesday to hold the bill in committee. Its fate remains unclear after a strong backlash from experts and community members gave senators pause.

“This bill, while I’m sure it’s well intended, has been identified by a lot of expert testimony as quite problematic,” said Sen. Maryanne Jordan, D-Boise, according to the Idaho Press.

Many Republicans were likewise critical of the bill, especially after opponents turned out in force to testify against it. Gretel Kauffman of the Times-News tweeted that of the 50 people signed up to testify about the bill, only Fred Birnbaum from the Idaho Freedom Foundation was in favor.

“In light of testimony from the department, from the hospital association, and from the wonderful members of our communities that have come to testify, I move that HB 277 be held in committee,” Sen. Lee Heider, R-Twin Falls, said, according to the Idaho Press.

Sponsored by Rep. John Vander Woude, R-Nampa, the bill proposes that Medicaid beneficiaries work at least 20 hours a week or be enrolled in education or training programs while also requiring those between 100 and 138 percent of the poverty line to seek out private insurance.

While it’s possible that the bill could see further action if amendments are proposed, it’s unclear what those alterations would be. Among concerns are the increased costs associated with staffing, managing and enforcing the new requirements. The Post Register reports a recent study concluded that the sideboard bill could cost Idaho up to $38 million more than a straightforward, or “clean,” expansion of Medicaid.

“The fiscal note on this bill was very suspect,” Jordan said. “There were several changes made in the estimated cost every time the bill was presented. Each time, it was four times the cost of the clean expansion that was voted in by our citizens. Idahoans deserve to know what they are paying for and how much they are paying. This legislation was misleading and deserved to die in committee.”

Another factor may have been a ruling from a federal judge in Washington, D.C. that struck down Medicaid work requirements in Arkansas and Kentucky.  The breaking news arrived the same day as deliberations took place and was announced to the committee.

“Taxpayers lose, working Idahoans lose, we would all lose with this legislation which is why I am thrilled it was held in committee,” said Rebecca Schroeder, executive director of Reclaim Idaho, which worked to pass Medicaid Expansion last year. “The voters overwhelmingly approved a clean Medicaid Expansion program. House Bill 277 is a thinly veiled repeal bill that would cause the very suffering Proposition Two was designed to alleviate.”