I recently had a delightful meeting with somebody who had genuine doubts about climate change. Having seen the impact of the Deep Water Horizon oil spill on the Florida coast, he was very concerned about the state of our planet. However, the persistent hyperbole, the seeming hypocrisy and the impossibility to discern fact from fiction in the climate change discussion had him quite disenchanted about possible actions. 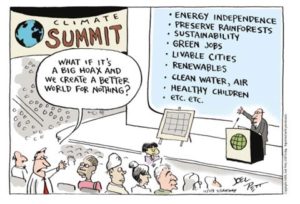 A friend of mine has repeatedly expressed hesitations about climate change policy out of concerns about increased government interference. It turns out that this basic distrust derived from her husband having been sent involuntarily to Vietnam while she was at home with young children.

Both of them are not alone with regards to climate change discussion disenchantment and distrust of government overreach. These are two factors that have kept viable climate change action from being implemented effectively. While 97 percent of climate scientists agree that global warming is mostly caused by human activities and advocate for action, according to the 2018 Yale Climate Opinion Study (https://climatecommunication.yale.edu/visualizations-data/ycom-us-2018/) only 50 percent of Bonner County residents do. Overall, 62 percent of Americans polled in 2018 believed that climate change has a human cause, up from 47 percent in 2013.

The lack of trust in scientists and the belief that there is still a scientific debate contribute to this as well. The media has done its part in skewing this perspective with giving 50 percent of media coverage to the 3 percent of minority experts. But change is happening even in Idaho.

According to the Idaho Statesman, governor Brad Little said in January: “It’s here. We’ve just got to figure out how we’re going to cope with it. And we’ve got to slow it down. Now, reversing it is going to be a big darn job.” In accordance, House Resolution 22 has just been adopted to form a committee to study the effects of climate variability on Idaho’s state agencies that are responsible for resource management. The resolution is based on the facts of earlier winter snowmelts, longer fire seasons and higher intensity and occurrence of storms necessitating impact mitigation strategies.

On a larger scale, Fortune Magazine this February reported that human caused climate change has reached the gold standard of certainty. “Using a statistical analysis common in particle physics …scientists evaluated volumes of satellite data. The implications are that there is only a one-in-a-million chance that the pattern of atmospheric heating is not the result of human activity.”

So the question remains, why the public perception difference? What seems to be primarily driving this misperception is a deliberate fossil fuel industry misinformation campaign. Last fall, the independent panel tasked with reviewing EPA draft assessments on air pollution health risks, has just been replaced with a committee, whose members are sorely lacking in relevant scientific expertise and/or have ties to the petroleum, chemistry and tobacco industries. The report affirms previous evidence of small particulate matters causing premature death via cardiovascular and respiratory, and likely cancer and nervous system effects. According to the World Health Organization, air pollution is causing 4.2 million premature deaths globally — the leading environmental health risk. The fossil fuel industry has waged a campaign against these facts since the first studies were published in 1990, as both ozone and particulate matters are closely related to production or consumption of fossil fuels. Challenging the EPA report with fake scientists sounds very familiar to tobacco industry attempts to discredit the connection between health effects and smoking.

Industry lobbyists are not only very skilled with sewing doubt about scientific facts that go counter their pocket books; they also excel in taking advantage of citizens’ fears. For example, media campaigns exaggerating restrictions on personal freedom and government overreach with regards to climate change action, have blinded people to the social, economic and environmental possibilities of gradually switching over to cleaner energy sources. Who can possibly argue with agreements that reduce air pollution while reducing CO2 emission?

I will give a presentation about how to sort out facts from fiction in the climate change debate as part of earth day activities at the library on Tuesday, April 16, at 5:30 p.m. If you have any doubt about the impact and solutions of climate change, please do consider coming.

As a naturopathic physician, Dr. Gabrielle Duebendorfer is concerned about the health effects of climate change. She has founded the Sandpoint Chapter of Citizens Climate Lobby, advocating for viable solutions for climate change. Contact [email protected]