They say that opportunity doesn’t ring twice, but that isn’t true about having the opportunity to play alongside premiere cellist Zuill Bailey in concert. If you heard Bailey perform last summer, you know you’ll want to hear him again, and if you weren’t able to attend last week’s performance in Coeur d’Alene, you’ll want to be sure to look for his next North Idaho visit. 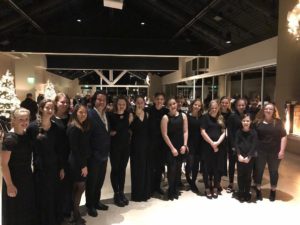 Students with the Music Conservatory’s El Sistema Chamber Orchestra were invited to open Bailey’s program, which was part of his winter classic series. As an extension of last summer’s connection with Connoisseur Concerts, the Chamber was the sole student highlight at last Thursday’s event.

“Part of the goal of El Sistema is mentorship,” Kathi Samuels MCS Board President said. “This is what Zuill and his fellow cellists provided to our students last summer during a community master class. We were excited to accept another invitation for exposure and performance.”

Samuels said that this winter’s esteemed quartet of Benjamin Breen, violin; Martin Sher, viola; Zuill Bailey, cello, and Awadagin Pratt, piano brought the public a unique chance to hear these accomplished musicians, who also donate their time to interact with music students all over the world.

This beautiful program at the Hagadone Event Center was attended by over 120 concert goers. “It was fun to support our students on a group road-trip, and showcase their skills to a completely new audience!” Samuels said.

Looking to support our students locally? MCS would like to announce its holiday concerts and an opportunity to hear the rest of its El Sistema groups perform.

Upcoming holiday concerts include a community outreach with its El Sistema beginning Youth Orchestra and Choirs at the East Bonner County Library on Tuesday, Dec. 18, from 5:30 to 6:30 p.m. This event is open, MCS encourages attendance by young and old.

The community is also invited to a repeat Christmas performance of the popular children’s opera, Amahl and The Night Visitors, which will include excerpts from the opera, Saint Seans on Dec. 23 at 2 p.m. This one-of-a-kind festive event includes a gingerbread making station following the concert and will be held at First Lutheran Church, 526 Olive Ave. Both of these performances are free to the public.

To learn more about the Music Conservatory of Sandpoint or our El Sistema performing groups, please call the MCS Office at 208-265-4444 or visit us online at sandpointconservatory.org.