If you build it

There is one ultimate goal that many in the Boy Scouts of America seek before their 18th birthday: Eagle Scout status. For Sandpoint High School student Aiden Ackerman, 17, the drive to reach the coveted rank is the culmination of almost 10 years of hard work. 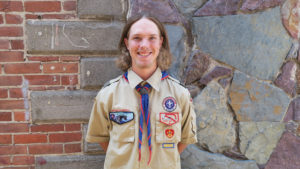 “Being an Eagle Scout shows you have responsibility, that you can do the work and be responsible,” said Ackerman.

Ackerman started as a Cub Scout in the second grade, then moved onto the Boy Scouts in sixth grade. He has been in Troop #308 ever since.

Through the years, Ackerman has worked his way up the ranks, satisfying all the requirements for his merit badges and ranks with a determination anyone would be proud of.

“The ranks go Scout Second Class, then First Class, Star, Life and then Eagle Scout,” said Ackerman, who is currently ranked as a Life Scout.

Each rank emphasizes an important trait that fits in with the Boy Scouts of America’s motto to “Be Prepared.”

“Eagle Scout is about putting all those skills to the test,” Ackerman said. “You’re tasked with a final project, and basically doing a final exam on your project.”

For Ackerman’s final project, he decided to find a solution to a problem he noticed at Sandpoint High School: when riding a skateboard or longboard to school, there was no place to keep the board safely. Lockers were too small, the boards are too cumbersome to carry around easily. Ackerman did some research and found a method to solve the issue.

“Right now, most students who ride a longboard or a skateboard to school, or a scooter, have to ask a teacher to hold it in their room for the day,” said Ackerman. “There’s no room in lockers or storage.”

Ackerman’s solution is to raise funds to purchase a special skateboard locking rack that can be installed right next to the bike racks at the high school. The racks are free-standing and have slots where students can place their boards and lock the front.

“The trucks of the board prevent it from sliding out, so it should work pretty well,” said Ackerman.

He said the rack would be both convenient and secure for the growing population of students riding a skateboard to school.

“It would be so much more convenient for teachers, and it would provide security for people that are afraid it might be taken out of a classroom.”

Ackerman ran the idea by the facilities director at SHS and the two found a convenient place to mount the rack.

“For the project, I’ll direct my scout troop where to put it, how to put it in,” Ackerman said. “They’ll then install it with me being the foreman for the project. Also, I’m going to try to raise money for some concrete, which shouldn’t be too much. It’s just going to be a small post in the ground that this will bolt to.”

The total amount that Ackerman is hoping to raise is around $1,200, which will cover the cost of a rack that will hold 14 skateboards, as well as the costs of the concrete.

“I’m planning on going to local boards shops, bike shops and sports shops around here and asking them to support me, as it could bring more business to them,” he said. “I’d consider putting a sponsorship plaque there, too. Most likely there will be a plaque there saying it was donated by an Eagle Scout.

If fundraising is successful, Ackerman will direct his troop to install the rack by the bike racks in the parking lot.

“The cool thing about having it is that it bolts down,” Ackerman said. “So, for snow shoveling and removal, they could just undo the bolts and take it out. They could even take it out during the summer, too.”

Ackerman said anyone interested in donating funds or concrete to the project should email [email protected], or this newspaper, and we’ll put you in contact with him.

“I’d like to thank Joanne Walker for the support and help she gave,” said Ackerman. “She’s part of the Eagle Scout board and she’s been one of the main people I’ve had to talk to for this project. Also, I’d like to thank Troop #308 for helping me with this project, and anyone who would like to help sponsor the project.”

Only about four percent of all Boy Scouts will ever achieve Eagle Scout rank, making it the highest achievement for a scout before they turn 18.

“The Scouts have provided morals and values that I think other clubs and activities don’t provide,” Ackerman said. “It teaches you skills you probably won’t learn anywhere else. … It’s helped in life skills for sure.”