Residents of the west Sandpoint neighborhood comprised of Madison Avenue, Willow Drive and Lincoln Avenue turned out en masse Sept. 3 to oppose a 15-unit, multi-family development planned for the 1700 block of Cedar Street.

Of the approximately 40 residents in attendance at the regular meeting of the Sandpoint Planning and Zoning Commission, 15 spoke against the housing complex and six others submitted written testimony. 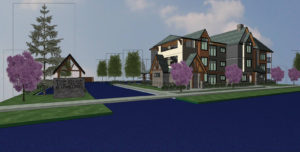 “I’d like you guys to take into consideration the number of people who are at this meeting,” said resident Patrick Beck, who told commissioners that he lives directly across the street from the proposed development site.

Beck’s testimony echoed many others’ in raising concerns about the narrowness of Cedar west of Division Street, the impact of increased traffic and that the project would not fit with the established character of surrounding single-family homes.

Commissioners considered but ultimately tabled a decision on the proposal from Hayden-based Cedar Street Investments LLC, which wants to build The Ridge at Cedar Street housing complex on four lots totalling 26,458 square feet along the south side of the 1700 block of Cedar. Designed in an upside-down L shape, the project features 12 two-bedroom/two-bath units and three three-bedroom/two-bath units with 24 associated parking spaces — including three dedicated to snow removal.

Aside from the increased amount of traffic — estimated by planners to be 150 vehicle trips per day — most disconcerting to neighbors was the maximum building height of 40 feet, with the complex rising three stories and featuring dormer windows.

“It’s going to strain the infrastructure capacity and dominate the skyline of this otherwise quite suburban neighborhood of predominantly modest single-family homes,” said neighborhood resident and former P&Z Commissioner Tom Russell. “Where this project is proposed, it will be horribly out of context, and the scale will dwarf the rest of the neighborhood.”

Representing the applicant, Todd Butler, of Forte Architecture and Planning in Coeur d’Alene, emphasized that the project meets both Sandpoint zoning requirements — which classify the area as Residential Multi-Family — and the comprehensive plan, which allows for higher density on the lots south of Cedar.

“I really feel that we’ve met all the guidelines of the Planning Department,” Butler said.

“I will confirm that, based on our code, he did check off all the boxes for additional standards for multi-family,” said Sandpoint Planning Director Aaron Qualls.

Despite that, residents offered detailed testimony — many quoting chapter and verse from Sandpoint Code — illustrating how the project would not “integrate seamlessly” into the surrounding area, dominating the street. Again and again, neighbors returned to safety concerns about Cedar Street, where they told commissioners that the lack of sidewalks and intensity of street parking reduced it to the equivalent of a one-lane road.

“It’s not that I don’t want people to have a nice home; I just don’t think the area is prepared for it,” said resident Jorie Gaines.

Commissioners seemed to agree with the neighbors. Qualls, however, warned them that because the project meets code it “could put the city and taxpayers in legal jeopardy” if it was outright denied.

“[T]he bulk, mass and scale is within your purview,” he said.

P&Z Chairman Tom Riggs asked if that meant the commission had no authority to deny — a question that triggered a five-minute recess during which time Qualls contacted City Attorney Will Harrington by phone.

It was Harrington’s opinion that the commission had no legal power to reject the project, only apply conditions, such as that it be stepped down to lessen its visual impact on neighbors.

“I’m just a little bit uncertain as to what changes we want to see,” said Commissioner John Hastings.

Unsure of how to proceed, the commission voted unanimously to table deliberations until the city attorney could be present to offer in-person legal counsel. The development will again be taken up by P&Z at its Tuesday, Oct. 1 meeting at 5:30 p.m. in the City Council Chambers.

Leaving the meeting, several residents expressed shock that the commission was legally unable to reject the project.

“I’m happy to appeal if they approve it,” one neighbor said aloud while exiting City Hall.