If you’ve been following this article for a while, you know how I like to document dangerous things with explosive potential. If this is the first time you’ve ever thought, “I’ll read what this guy has to say,” you’re in for a pleasant surprise.

On the list of dangerous and explosive things, Uranium is pretty high up on that list. I mean, we’re talking about the basis for nuclear weapons, the most destructive singular force human beings have ever (intentionally) created until we figure out how to build the Death Star. 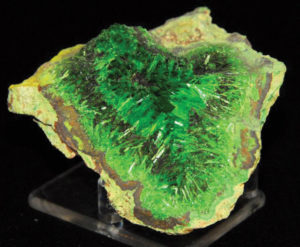 That’s because uranium is 70 percent denser than lead. This leads to the usage of uranium in metal armor for tanks and as ammunition designed to penetrate said armor. It also makes a great container for storing and transporting highly radioactive material, which is kind of ironic considering the metal itself is radioactive. I guess if you need to transport a lion, and the only way you can do that is by building a cage made out of feral cats, you’ve gotta’ do what you’ve gotta’ do.

The fissile method achieves its massive energy output by smashing two pieces of uranium (or plutonium) together with a great amount of force, either down a tube or inward (an implosion method). This causes a chain reaction, where uranium atoms absorb neutrons. Then, like a cell that has absorbed enough nutrients, the uranium atom splits into lighter elements, ejecting energy and neutrons that impact other uranium atoms and repeat the process.

On paper, this makes sense, but it’s hard to visualize how it goes from a fist-sized lump of uranium to a city-razing fireball.

Basically, this entire stadium is filled with pool balls, your cue ball and you.

Did I mention that these pool balls are all filled with gunpowder? This isn’t any ordinary gunpowder, each grain has approximately 1.5 million times the explosive energy of a normal grain.

You take aim and make your shot straight into the first cluster. Upon impact, the first ball explodes to eject its pieces in every direction. Some pieces fly off harmlessly while others pepper other balls in the cluster, which causes them to explode and trigger more balls.

At that point, your Olympic stadium is completely gone, and so is everything for what I assume is several miles.

This, in a crude nutshell, is uncontrolled nuclear fission.

What if you want all of that energy, but you don’t want it all at once? You want it for several centuries to power your brand new 1500MW toaster (Amazon gave “The Incinerator” four stars!).

That’s the intended difference between a nuclear bomb and a nuclear reactor. All of the energy is going to happen anyway, but you want it to happen slowly in a reactor.

Remember Three Mile Island and Chernobyl? That was what happens when it doesn’t go slowly.

One kilogram of enriched uranium can produce an immense amount of energy. How much? Get ready for it, this almost blew my socks off.

One ton of uranium can produce the same amount of energy as 80,000 barrels of oil. That’s about 3.3 million gallons of crude oil, which could produce around 1.5 million gallons of gas for your car. At current gas prices, that has a value of just around 4 million dollars.

Mining for and refining uranium is serious business. It’s formed during supernovae, under intense heat and pressure, which also means it’s rare and isn’t made by earthly volcanism. Much of what we mine up has to be ground up and then chemically treated with acids to be separated from other elements to produce yellowcake. It’s not nearly as delicious as it sounds.

Uranium was also mixed into glass mixtures to create fancy cookware that glows under UV light, but that stopped because of a little something called the Cold War.

It’s pretty cool, though, check out some videos online!

Now that my research for this article has tripped at least a dozen FBI filters, I’d better retreat back to my mancave. Have a good week!