Few things strike fear into the heart of man more than giant cats. A kitty is way less cute when it’s big enough to play with your intestines like a yarn ball.

Mountain lions are very unique animals that hold several records. They have the widest range of any mammal (excluding whales, dolphins and humans) in the western hemisphere, claiming stakes from the Yukon mountain range to the southernmost tip of South America. Understandably, with so much range, they’ve picked up a lot of different names: over 40 in English, which is more than any other animal in the world. You might know them as puma, cougar or panther. 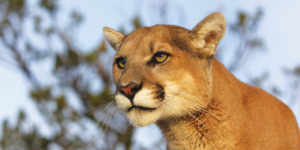 While cougars are massive by cat standards, they’re about half the size of an African lion. Male mountain lions get up to about 220 pounds, stand up to three feet at the shoulder while stretching up to eight feet long. Similar to their domestic cousins, the housecat, mountain lions have retractable claws. This keeps their primary tools sharp for when they need them. This is a pretty good trick for identifying a cougar print. If it has claws marks, it’s not a cat, though coyotes have similar tracks.

A cougar’s primary diet consists of wild ungulates (think: deer, elk, rarely moose), but they’ll feed on anything they can get their claws on including raccoons, mice, even porcupines and the occasional human.

Mountain lions can’t roar. Heck, I didn’t know that until I started researching them. This is the reason they’re not considered a “big cat” like African lions, tigers or jaguars. Cougars are actually pretty quiet, though they can emulate a human or an animal screaming, which is terrifying if you’re alone in the woods at night and you hear that nearby.

Being mountainous hunters, the puma also excels at climbing. A fully grown cougar can outperform coyotes and wolves by leaping up a rocky crag with the efficiency of your own cat climbing a carpet tower. They can also swim. If these things had wings, no one would be safe.

Like most cats (African lions being an exception), they’re not particularly social animals. They generally live alone, marking swaths of territories by doing things you only see people do on the darkest corners of the internet, like piling up leaves and other absorbent material and urinating on (marking) it. Mothers will make a nest site for cubs, having anywhere between one and six cubs per litter. She’ll bring them food at first, but pretty quickly she’ll teach them to hunt. After a year or two, the cubs will leave their mother and go out to find their own territories. Sometimes the father or other males will kill the cubs so he can reproduce with the female.

That must have been the Rob Schneider rom com that never got a greenlight. Cougarman!

Mountain lions are proficient assassins. Despite their impressive physical characteristics, they prefer to expend as little energy as possible in killing and eating prey. They stalk their prey through low brush, timber and ridges and attack with a leap from behind, using a mix of their teeth and downward momentum to break the prey’s neck. They don’t eat the prey at the kill site and instead prefer to drag it to a familiar spot, bury it and then eat it over a period of a few days. Though they prefer to eat their own kills, they have been observed scavenging remains from time to time.

If you’re worried about getting attacked by a mountain lion, don’t be. There have only been about 14 fatal cougar attacks on humans since the 1970s. There are a few things you can do to protect yourself from becoming a rare statistic, though.

Don’t hike alone, especially at dawn, dusk or night. Keep your kids close, within an arm’s reach. If you do run into one, which is extremely rare (they’re stealth predators, after all), make yourself as big as you can, make lots of noise and try to scare it off. If it thinks you’re a really big animal, it’s likely going to get scared and split.

If you do come under attack (which is even rarer than seeing a mountain lion to begin with), do whatever you can to protect your neck. This is their primary kill mechanism and they want to achieve it with as little energy spent as possible. Fight back. It doesn’t want to get hurt either, so it’s more likely to break off a kill if it risks being injured. Whatever you do, do NOT run. Running makes something click in predator brains to give chase, and let’s be honest, you can’t run 50 mph or jump 40 feet to safety. You stand a much better chance trying to scare it off, mano a gato.

It also helps deter them if you don’t feed the deer or raccoons. If a taco truck was just sitting around giving away delicious tacos, wouldn’t you stalk it, too?