Once upon a Reader dreary, while I pondered curious and hungry…

Ravens have long been a curiosity in human culture. We’ve often speculated they may be some of the most intelligent birds on the planet and have shown the unique ability of performing interspecies communication, similar to dogs. We’ve noted them holding grudges and even identifying humans they like. 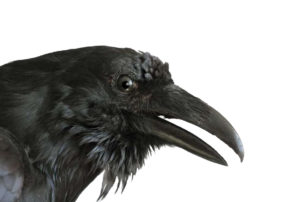 Ravens are basically just large crows, members of the genus corvus. They tend to feed off scraps and carrion, making them some of the most efficient garbage disposal systems in the natural world. Could you imagine if your garbage collector could fly? Despite this unique and highly beneficial trait, humans have looked at their nature as death-eaters to be ominous and dreadful. As with any bird, ravens are capable of spreading disease from the air, though it might surprise you that they’re more sanitary than ducks and other waterfowl, which are the primary incubators and spreaders of influenza.

The importance of a raven’s job as a carrion-eater cannot be overstated. It might be gross, but they’re the unsung heroes of the natural world. While watching a raven dig into a bloody pile of road pizza might be disgusting, could you imagine a world where they didn’t exist? Pestilence and disease would run rampant. Our roadways, forests, lakes, alleyways, virtually every surface we look out on would be covered in decaying meat. Though I’m sure “World of Decay” would have made for a sweet Black Sabbath album, it’s not the kind of world we want to live in, and thanks to ravens, it’s one we don’t have to worry about.

Have you ever been outside and heard the same three ravens cawing over and over and over again? Ever notice they do it at the same intervals with similar spaces between each caw? This isn’t random behavior. We believe they’re positioning themselves into specific places they’ve found food before within earshot of other members of their murder (a gathering of ravens). Each time they caw, they’re checking in with the other ravens. If the line of communication changes or breaks, other members of the murder know where something has changed. Maybe there’s danger near Dave, or maybe Betty found something and is investigating. This kind of behavior is what put humans on top of the evolutionary chain. Not our ability to wield tools, but our ability to effectively communicate over distances.

Scientists have tested ravens and found even more interesting behavior related to their ability to hold grudges. Ravens appear to be capable of ignoring an immediate reward for promise of something greater in the future. Scientists tested this by offering ravens bits of bread. The raven could eat the bread right away, or the raven could bring the piece of bread to a scientist and exchange it for a tastier piece of cheese. In almost every case, the raven would trade the bread for cheese. They even appeared to teach other ravens that if they were willing to be patient, they’d get a better reward. I’ve known several humans that can’t grasp that concept. If the scientist slighted the raven by taking the cheese and the bread, the raven wouldn’t return to trade with that scientist again.

It might surprise you that there is influence of the raven’s ability to communicate in human speech, especially in the Pacific Northwest. There are words in the Lushootseed language, spoken by several Native American tribes from the coastal Northwest, that mirror the clicking sounds made by ravens when interacting with humans (called “clapping”) Want an example? Seattle is a romanization of Chief Seattle of the Suquamish Tribe. The double-T is the closest thing Europeans had to replicating the sound, which almost sounds like a tiny horse galloping. Ravens have been observed intentionally making as many as 33 different sounds and calls.

There’s a reason ravens have earned the reputation of tricksters in mythology. They’re intelligent animals, smart enough to require mental stimulation to avoid boredom and mental breakdown. In Canada, they’ve been observed waiting on the roof of a supermarket for people to pass under before pushing snow off on them. They’ve been seen teasing grown wolves and even playing with wolf pups. They’ve also tricked larger predators into doing their dirty work, mimicking the call of a wounded animal to draw wolves, bears or foxes to come in and eviscerate a thick-skinned corpse so the birds can feast.

I learned so many cool things about these birds, and I ran out of room before I could even get to the mythology that surrounds them. If you’re curious and would like to learn more about ravens, we have several books and films at the library about them. The next time you chase one away on the street, just remember they can live up to 40 years in the wild and are notorious pranksters. Don’t do anything you might regret for the next four decades!

Be nice to the birds, man.