The founders of the nonprofit Plant Positive, Gwen Le Tutour and Katie Adams, want it to be crazy, because sometimes in order to create widespread awareness for an issue, you have to set a world record. 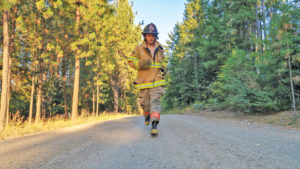 That issue is cancer prevention — something Le Tutour and Adams have been studying, and something they wish others would pay a little more attention to.

“Fifty percent of most cancer can be prevented. That’s a lot,” Le Tutour said. “Every year, half a million people in the U.S. die from cancer. That means a quarter million people don’t have to die every year.”

Le Tutour is a volunteer firefighter in Sandpoint and said firefighters take cancer very seriously. Entering a burning house full of plastics can be a serious health risk due to all the carcinogens in the air, Le Tutour said, and it’s a health risk that is well researched by the American Institute for Cancer Research.

AICR categorizes carcinogens according to how harmful they are, Le Tutour said, and he said some people might be surprised by the research. For instance, processed meat is a group one carcinogen.

Le Tutour and Adams found that the AICR has 10 tips for cancer prevention, and knew they wanted to help share that knowledge with others. With the platform of their healthy living non-profit and background in ultrarunning, it seemed only natural to combine firefighting with running an obscene distance. It just so happened that such a bizarre feat would mean setting a world record.

“We thought, ‘We like to do crazy things, let’s do something to get people’s attention,’” Le Tutour said.

On April 28, Le Tutour will run between the Sandpoint and Dover fire stations — a distance of about three miles — until he completes 100 miles. He’ll start at 8 a.m. and continue to run through the night and into the day Sunday. During that time, the Sandpoint fire station will be open to the public so they can learn more about the cancer prevention initiative.

Right now, he has no clue when he’ll finish the 100th mile.

“If I have to walk the last 60 miles, I’ll walk. If I have to crawl the last 20 miles, I’ll crawl. I have to be humble and know that it’s a very difficult thing, and unexpected things do happen,” he said. “I will give it my everything.”

To kick off the campaign, Adams and Le Tutour will be at Evans Brothers Coffee Friday, March 23, at 6:30 p.m. There will be healthy snacks and refreshments, and the couple will talk about their goal to “encourage and promote a healthy lifestyle to prevent cancer within our community.” While there, people can also learn how to volunteer the day of the 100-mile run.

Le Tutour said he knows sometimes people can resist change — especially when they’re told their choices might be leading to higher cancer risk — but he hopes people will be open to learning.

“We’ve always seen resistance to positive change, but it happens,” Le Tutour said. “Slowly people are going to realize that (their lifestyle) is worth taking a look at.”