Everyone has a theory on pyramids. Some people think aliens did it. Me? I think when you don’t have a CAD program, building something wide at the bottom and skinny at the top is the most effective method if your entire labor force can’t read.

It’s a pretty simple shape, though there have been a lot of iterations built around the world around the same time, while some of our more modern explorations have yielded some pretty… uh… Interesting results.

Everyone knows the Pyramids of Giza. You say the word “Pyramid” and they’re the first thing you think of, no matter what age you are. They’re pretty special, being the last of the Seven Wonders of the Ancient World to still be standing, one around 455 feet in height. 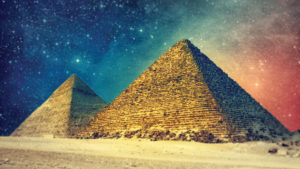 They were thought to have been built over several decades between 2600 and 2400 BC, and remained the world’s tallest human structures for at least 3,500 years. They also used to be smooth, but the exterior blocks were cannibalized for other buildings in Cairo.

The Pyramids of Giza weren’t the first pyramids, though.  That honor goes to the ziggurats of ancient Mesopotamia. The ziggurats were stair-stepped pyramids made from sun-baked mud and clay. That means they didn’t preserve at all.

We believe ziggurats may have been built as early as 6000 BC and were used exclusively as sites of worship. During this time, religion was cornered by priests that spent their lives dedicated to worship and rituals, so the common folk weren’t allowed up there. Ziggurats weren’t perfectly pointed like the pyramids we think of. In fact many of the first ones are believed to be more like funky ovals.

You know what they say: If it ain’t broke, don’t fix it. We’re still building pyramids. Why?

Pyramids have a very wide base that shrinks the higher you get up, so you can fit a lot of people into the base, which holds tremendous structural integrity, while it gets cheaper to build toward completion.

Want an example of a modern pyramid?

The first, and smallest on the list, is the Louvre Pyramid. Anyone that’s had the pleasure of being at the Louvre will laugh at me when I confess I didn’t know that was an entrance until I looked it up.

The Louvre Pyramid was constructed in 1989 and serves as an entrance to the museum.

The original entrance wasn’t large enough to accommodate the growing volume of people coming to view the artwork, so they had to improvise. You enter through the pyramid, go below ground and then back up into the museum behind the original entrance. Ingenious!

The Luxor Las Vegas is a great representation of what the Pyramids of Giza must have looked like in their prime. The Luxor is a little bigger than the Red Pyramid of Dashur, Egypt, standing at about 364 feet tall.

The outer surface of the Luxor is reflective, and under certain angles can appear to blend into the sky. The Luxor has a neat feature the Egyptian pyramid architects never dreamed of: A massive light beam shooting into the sky! They used specially designed mirrors to focus the light of xenon lamps (those annoying blue lights you hate) to create an awesome beam of light.

This beam of light is so powerful, commercial airliners in Los Angeles can see it.

Not all pyramids are perfectly equilateral. A few more modern examples swing towards representation of extreme right triangles.

The Shard in London is an unusual modern pyramid. At 1,016 feet tall, it’s the tallest building in the United Kingdom. What it lacks in looks, it makes up for in ingenuity. Designed to be energy efficient, it’s equipped with its own power plant to convert natural gas into electricity and heat.

Apparently the Shard also has a problem with trespassers sneaking up to the top and jumping off (with parachutes, hopefully). In the age of selfie sticks and GoPros, I have no doubt you can find some of their high-flying antics online, and see a bit of London you probably never wanted to see in the process.

I don’t think this is what they were talking about in “Field of Dreams”.

Our last example is of the largest pyramid in the world. Where is it, might you ask? What tech-centric architect’s utopia might harbor the prestigious title of “world’s largest?”

It turns out The Ryugyong Hotel has a few accolades along with the world’s largest pyramid, including one of the longest construction times for a skyscraper. Actually, it’s still under construction. Any guess how long?

The Ryugyong Hotel is currently at 30 years, and counting.

Every building faces problems during construction, but few have seen problems as large as Ryugyong’s.

It all started with the collapse of the Soviet Union, a major backer of North Korea at the time. Following the financial turmoil of Soviet money disappearing, attempts were made to appeal to other investors around the world. It turns out that being a highly aggressive rogue nation with nuclear capabilities and a penchant for harassing your neighbors and their friends doesn’t fit on a travel brochure, so as of the writing of this article, the world’s largest pyramid is still just a pointy landmark.

In its defense, I still think it looks better than the Shard.