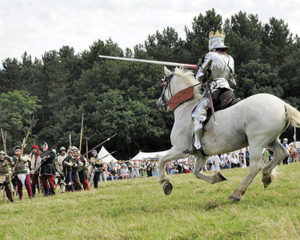 The Industrial Revolution changed all of that and made these big, expensive animals virtually obsolete.

Despite the fact that we don’t use horses nowadays for hard working tasks, we have lots of specialized and well-documented breeds built for all sorts of different things. It wasn’t that way in the Medieval ages. In fact, during the Dark Ages, political instability, constant warfare and rampant illiteracy led to a loss of good equine stock. Heck, they didn’t even keep track of what a breed was back then.

If this seems backwards, it is. We’ve discovered tremendous evidence during antiquity that breeders were keeping track of equine bloodlines, what kinds of horses from which locales were best suited for specific tasks and so on. Cavalry warfare was a big deal during the times of the Romans. They had to know their rides as well as a Formula 1 driver does today.

The collapse of the Roman Empire was a big part of it. Civilization collapsing plays a major part in the degradation of knowledge. Another was the changing circumstances of warfare. Local battles between warring lords saw a handful of knights and men-at-arms clashing amidst rows of inexpensive footsoldiers. Many of these battles were just grand whizzing contests, so there wasn’t a need to expend tons of money on expensive cavalry. If someone decided to besiege their neighbor’s castle, well, horses aren’t very good at climbing ladders.

This changed over the centuries, however. Once the European kings and lords started to slow down murder on the homefront and turn their sights to new conquest in the Middle East during the Crusades, the need for well-trained cavalry became very apparent.

While the Europeans were having a fanciful time smacking each other on foot, the various caliphates in the Middle East had been training fast horses with agile bowmen and lancers to charge huge distances and strike with brutal hit-and-run tactics.

Math quiz: On the field of battle, what’s better? Two legs or six?

Arabic influence in the equestrian world persists even to this day. Who hasn’t heard of an Arabian when talking about horses? They’re big, strong, fast and built to do just about anything you need them to do. This breed, or one related to it, is very likely the “Spanish Horse” written about in European Medieval texts. After all, Islamic caliphates invaded Spain around the same time, and there’s no doubt their horses left their mark.

Despite poor documentation of breed types, Europeans did keep track of what function their horses were set to perform based on their body type.

Destrier. This was the Ferrari of Medieval horses. This is what the baron showed up riding to the battlefield. Like a real Ferrari, it probably didn’t get driven into battle very often. Destriers were huge and impressive and mostly for show. Lords showed them off to say, “Look, I can afford this. Fear me, respect me.”

Courser. This was the primary warhorse in knight-to-knight combat. Strong and fast, Coursers got work done. They were expensive, but not as expensive as the Destrier. Coursers were also used in tournaments and are the horse most frequently depicted in paintings of the joust. Think of it like an Army Humvee.

Rouncey. These were basic horses, a sort of catch-all term for a general purpose horse. Somewhere between a Festiva and a Jeep.

Jousting was huge in the medieval ages. It was like the Superbowl, but with more accidental death. Jousting tournaments went on for centuries, and they became safer and more noble affairs the more time went on.

However, you could wrap a horse and rider in bubble wrap and throw a caution cone on his head, it’s not going to stop someone from getting hurt when two people are racing at each other, slamming one another with blunted spears at three and a half times their weight in G-forces. These clashes were intense, and it wasn’t infrequent for a lance to break and splinter and maim or kill someone.

In the joust, later called tilt, horses were bred specifically for the task. These were called chargers. They were basically the dragsters of the medieval world. They would have cloth or mail draped over them, called caparison, and their heads would be protected by a special metal barding called a chanfron. This helped limit the chance of injury to the incredibly expensive animal they were rushing headlong into pointed danger.

Jousts didn’t always just use lances, and in fact tended to switch weapons as matches went on. Because after a day of watching people charge each other with sticks, it only made sense to switch it up and start using axes, swords or daggers. Variety is the spice of life (and death)!

Luckily for our horses, most of them aren’t subject to jousting or cavalry warfare anymore.

We’ll leave the jousting to the frat bros in golf carts.