Funk to the Nth Power

Combining several genre influences into one unique sound, The Nth Power is not a band that plays to conventions. What they do play to is a sense of human harmony and goodwill. They’re bringing that positive spirit to Sandpoint this month when they play The Hive Sunday, Jan. 29. We spoke to band guitarist Nick Cassarino about the band’s recent projects, their unique formation story and how they keep a positive vibe during discouraging times.

SR: Hi Nick, thanks for talking to us. For those unfamiliar with The Nth Power, tell me how you would describe your music. 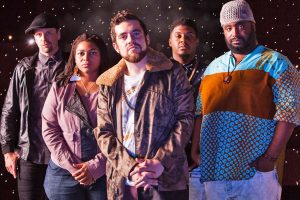 SR: You have a new project out, the live album “To Be Free.” Can you tell me about that and the process of making it?

NC: We decided to do a live album because we wanted to showcase our live show. We just decided to do it then booked studio time. We chose a venue in New York where we brought in our own studio equipment. We wrote songs for it and basically took it right up to the wire. The day of, we were still writing songs, but we thought it was important to get that music out and talk a little more about the stuff that is happening in our country.

SR: Are social and political themes a major influence on your work?

NC: It hadn’t until now, but now we’d like to make that a major part of what we do. For me personally, it was the realization that I have a microphone and shit is hitting the fan in this country. It’s nothing new, you know. I’m not doing anything new here.

SR: It’s certainly something I’ve heard from other artists. A lot of them are taking some comfort in the idea that great art is often made during difficult times.

SR: I understand The Nth Power has an unusual story about how you formed up. Care to share that with our readers?

NC: A mutual friend, Jennifer—I played in her band for years—she put together a one-night gig during the jazz festival in New Orleans in … I think it was 2012. We were playing in The Maple Leaf from 3 a.m. to 6 a.m. Basically, all four of us were playing behind Jennifer, and we looked at each other and realized that this was something special.

SR: How did you take that experience and turn it into something lasting?

NC: It was a little tricky to get everything together, but we basically just started writing. That was in April or May of that year, then we came down and recorded what we had written. That was it, really. We kept writing, kept getting gigs and people started making it more of a priority.

SR: Here in Sandpoint, you’ll be playing at The Hive, which—

NC: [The Hive owner Jeff Grady] is the man! When we first played there a couple years ago, he let us rehearse there all day the next day that we had off. It was so nice and generous of him. We love that guy and we’re really happy to be coming back.

SR: I’m sure Sandpoint audiences remember you from that first show, but for those who didn’t make it, can you tell me a little about the style of your live performances?

NC: The Nth Power mission is all about the healing power of music. We’re about spreading a message of love and goodness and healing through the music. Everyone in the band gives life to this, so musicians will love it, but we also write songs with stories that have meaning that everyone can relate to. In terms of the show, we’ve crafted it in a way that’s exciting and that moves people. So we really want it to be an escape from the day-to-day life and the day-to-day grind, the necessary things that we have to do to survive.

SR: I’m sure that’s something that people can really use these days. Thanks again for taking the time to talk to us!

The Nth Power plays The Hive on Sunday, Jan. 29. Doors open at 7 p.m., and the show starts at 8 p.m. The show is restricted to ages 21 and up, and IDs will be checked at the door. Tickets are $12 in advance or $15 at the door. Buy tickets online at www.livefromthehive.com or pick them up locally at Pucci’s Pub, Eichardt’s Pub, 7B Boardshop, Evans Brothers Coffee or at the door on show night.