Paris Climate Agreement: both rocks and momentum ahead

Editor’s Note: In December 2015, Sandpoint’s Gary Payton reported in the Reader on the historic Paris Agreement, an international pact designed to address climate change and its global impacts. Nations of the world set a goal to keep the rise in global average temperature to “well below” 2 degrees C (3.6 degrees F), limit the rise to 1.5 degrees C (2.7 F), and outline a path to a low carbon economy by 2100. 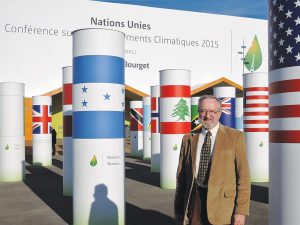 Gary Payton standing in front of the COP21 hall in Paris in Dec. 2015. Courtesy photo.

A few weeks ago, Rick Johnson, the executive director of the Idaho Conservation League (ICL) shared a metaphor for the conservation and environmental challenges in the Trump Administration. In “What’s Ahead Is Like an Idaho River,” Rick painted a picture of white water rafting which many in North Idaho can relate to. For a successful run through churning water, “…you don’t focus on the rocks in a rapid. You focus on the flow of the river through the rocks.” The metaphor offers a perfect way to review the Paris Agreement on climate change at the one-year mark and access the challenges which come with the inauguration of Donald Trump.

During most of 2016, the Paris Agreement was in a “long pool, pretty calm waters.”  The majority of the year’s international action created momentum, encouraged cooperation and even generated a small sense of optimism that global leaders were taking needed steps to address the worst impacts of climate change. Last April, leaders of 175 countries gathered at the United Nations in New York City for the official signing ceremony of the Paris Agreement. Among the iconic images was Secretary of State John Kerry with his granddaughter in his lap penning the support of the United States to the historic pact. In September, President Barack Obama and Chinese President Xi Jingping formally submitted their nation’s ratification documents in a ceremony in Hangzhou, China. On that single day, the two countries responsible for 40 percent of global greenhouse gas emissions underscored their then-commitment to action. By October, 55 nations representing 55 percent of annual global emissions had ratified the agreement. Meeting these two thresholds meant that on Friday, Nov. 4, the Paris Agreement “entered into force” as the international roadmap to address the full impact of the climate crisis across the 21st century. The 2016 run along the river had been swifter than many predicted. But on Tuesday, Nov. 8, the election of Donald Trump signaled the onrush of dangerous whitewater rapids below, along an uncharted piece of our river.

Absolutely, there are rocks ahead in the rapids we have begun to run in 2017. They are dangerous, frightening and challenge the United States response at the federal level to the existential threat to the future habitability of the planet. The ascent of Oklahoma’s attorney general, Scott Pruitt, to head the Environmental Protection Agency foreshadows an all-out assault on EPA regulations aimed at reducing greenhouse gas emissions in electricity production, vehicle emissions, and oil and gas production. The core of the U.S. commitment to the Paris Agreement is EPA’s 2014 Clean Power Plan. Roll back discussions are already underway in Washington, D.C. The Senate confirmation of Montana’s Representative Ryan Zinke to lead the Department of the Interior suggests renewed efforts to support construction of a major coal export terminal at Cherry Point, Washington. Powder River Basin coal, mined in Montana and Wyoming, transits Sandpoint and numerous other small towns in North Idaho en route to coal-fired power plants in East Asia. And, with the former CEO of ExxonMobil, Rex Tillerson, as the Secretary of State it is unclear if his muted support for the Paris Agreement can withstand pressure from the Trump White House to withdraw from the historic pact. In short, our river boils from the rocks ahead.

Beneath us, however, run strong currents of rushing water. While not ignoring the rocks, our task is to “focus on the flow of the river through the rocks.” And, the flow is powerful. Last November’s U.N. Conference of the Parties (COP22) in Marrakech, Morocco, affirmed international commitment to act in the face of human accelerated climate change. Delegates stated, “…momentum is irreversible—it is being driven not only by governments, but by science, business and global action of all types at all levels.” In an independent action, the leaders of 365 companies and major investors urged Mr. Trump not to abandon the Paris Agreement. “Failure to build a low-carbon economy puts American prosperity at risk.” Their communication was backed by a pledge to push ahead with their own carbon reduction goals regardless of what the new administration does. Meanwhile, recognizing the critical role of cities in reducing greenhouse gas emissions (cities account for 70 percent of worldwide emissions), the Global Covenant of Mayors for Climate and Energy rededicated themselves to action. Mayors of 7,100 cities around the world are leading efforts, setting carbon reduction targets, and refining action plans. Finally, market forces are on the move. Last year, investment in renewable energy hit an all-time high—nearly $350 billion—or a greater investment than in fossil fuels. And, the trend is accelerating.

Closer to home, the same strong currents of our rushing river are moving in Idaho. In southern Idaho, ICL helped show Idaho Power that closing the North Valmy coal plant will save Idahoans money while protecting our climate. In Montana, owners of the Colstrip coal plant that feeds some power into Idaho see the same thing and plan to shutter part of that plant soon. In both cases, the flow is towards clean energy and away from fossil fuels. As the cost of fossil fuels, both monetary and environmental, continues to rise, we can ride this wave towards a clean energy future.

Are there rocks ahead in our rapid? Absolutely. But, one year after the historic Paris Agreement there’s a broad international consensus—no one leader, no one country can divert the actions of the global community in addressing the onrush of climate change. So, be mindful of the rocks, push off when required, but stay focused on the flow of our moving river as we act at the individual, organizational, community, business and state level.