Proposed mines in the Cabinet Mountains are under fire after Montana Department of Environmental Quality hit Hecla Mining Company and its CEO, Phillips S. Baker Jr., with a violation of its bad actor laws. 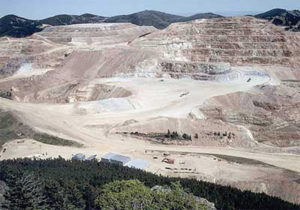 The Zortman-Landusky gold mine, where numerous spills – including one where over 50,000 gallons of cyanide was spilled – contaminated local waterways. The mine was ultimately shut down in 1998. The company then filed for bankruptcy and left the state of Montana without proper reclamation of the land. Photo courtesy Facebook.

The violation spells trouble for the proposed Rock Creek and Montanore Mines in Montana, which have been dogged by legal challenges from conservation organizations. Opponents in Montana and Idaho fear toxic discharge from the mines will infiltrate regional waterways and flow into Pend Oreille-region rivers and lakes.

“DEQ does not issue this violation letter without careful consideration,” wrote Tom Livers, director of Montana DEQ, in his letter to Hecla. “DEQ is well apprised of the high reputation Hecla has earned for safety and its commitment to minimizing the environmental impact of its proposed projects. Hecla’s cooperation with, and commitment to, the State of Montana are appreciated. Nonetheless, DEQ will enforce Montana law regardless of a company’s reputation.”

The conflict centers on Baker and his history with Pegasus Gold, a mining company that declared bankruptcy in 1998. As a result, the company defaulted on its environmental restoration obligations at its Zortman-Landusky, Beal Mountain and Basin Creek gold mines. The state of Montana was forced to step in and oversee cleanup of the toxic mess instead, a process that has cost state taxpayers $2 million per year and will continue to do so for the foreseeable future. To date, Montana has spent more than $74 million on cleanup efforts.

Montana DEQ alleges that mining operations under Baker’s oversight are a violation of the state’s bad actor laws, which rule that an individual cannot oversee a mining or exploration operation if he or she forfeited obligations on a previous project. To correct the violation, Montana DEQ told Hecla that it must reimburse the state the cost of reclaiming the forfeited mines, as well as pay any penalties and interest the state deems necessary. Alternatively, it can demonstrate that Baker will not be a part of any mining operations within Montana.

“The ramification of the Pegasus bankruptcy continues to be felt in the state of Montana in the form of expenditure of millions of dollars of environmental work each year in perpetuity,” Livers’ letter states. “… In this instance, (amendments to the Metal Miner Reclamation Act) bar Phillips Baker from involvement in any mining or exploration activities in Montana unless the statute’s remedial steps are completed.”

Conservation groups like Earthjustice, which requested that the state enforce its bad actor laws against Baker, see the decision as a major victory. For years, activists have challenged the proposed mining operations, saying its environmental impacts will seriously damage the health and welfare of Montana and Idaho’s citizens and environment.

“Today’s decision establishes that Hecla and Phillips Baker cannot charge ahead with damaging mining proposals in Montana’s Cabinet Mountains unless and until they deal with the toxic legacy Baker’s former company, Pegasus Gold, left behind,” said Earthjustice attorney Katherine O’Brien in a press release. “DEQ’s action represents just what Montana’s ‘bad actor’ laws are intended to do — protect our state’s land, water and communities from mining companies that abuse the privilege of operating in Montana.”