The number of COVID-19 cases has leapt both in the Panhandle Health District and Idaho as a whole in recent weeks. PHD reported five new lab-confirmed cases June 24, bringing the total in the district to 169 since monitoring began in March: 133 in Kootenai, 13 in Benewah and 14 in Bonner counties. Nine cases remain “undetermined,” meaning public health officials are unable at this time to determine the county of residence for individuals who have tested positive for the virus.

Of the 169 cases, 56 are still being monitored — meaning they present active symptoms. One death has been reported in the district since monitoring began and one individual is currently hospitalized.

Those numbers may sound small in total, but public health data shows a dramatic spike in cases that started around June 9, when PHD was monitoring fewer than 20 cases. In the space of 12 days, as of June 21, that number had nearly tripled — and not because of increased testing. As PHD officials told the Sandpoint Reader in early June, “Although it’s true that the amount of testing being done in our district has slightly increased, we don’t think we can attribute all the new cases to an increase in testing.” 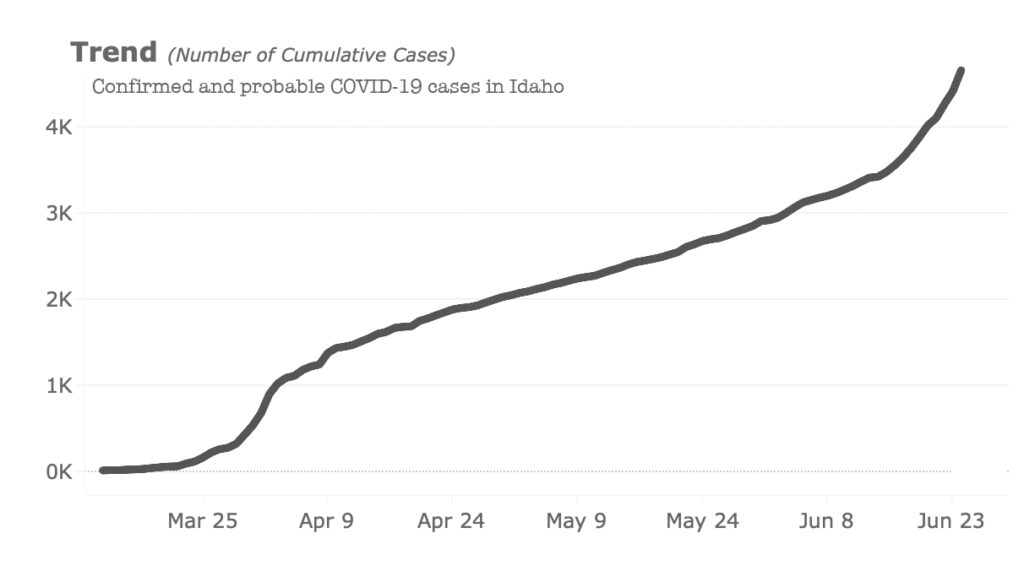 A chart from Idaho Dept. of Health and Welfare showing the sharp rise in COVID-19 cases the past two weeks.

Similar upward trends in COVID-19 cases have been seen elsewhere in Idaho, including the state’s most populous county. Ada County, which is monitored by Central District Health, reported so many cases in the first weeks of June that officials there decided to roll back reopening to Stage 3, requiring the closure of bars and nightclubs, and prohibiting gatherings of more than 50 people.

The surge in COVID-19 cases — which has been seen in states including Arizona, Florida, Oklahoma and Texas, among others — has led public health officials to consider scaling back reopening plans, and businesses are reclosing even without government order.

In Sandpoint, at least one local business has already voluntarily closed its doors due to an employee testing positive for COVID-19. The 219 Lounge, which had reopened with strict social distancing and sanitation protocols, closed again after a staff member learned June 18 that they had been exposed to another asymptomatic individual. The bar worker tested positive for COVID-19 on June 19, prompting the closure.

According to a Facebook post from the 219 on June 23, “We closed the bar and performed a deep cleaning and sanitization of the bar. From the time our employee encountered the asymptomatic carrier the staff member only worked the evening of June 17th. During that time, our staff member wore a mask and gloves as has been our policy since the reopening of the bar on June 3rd. When we were allowed to open the bar in early June we implemented a mandatory mask and glove policy for employees, temperature checks for employees prior to working, strict sanitizing efforts, reduced our capacity, limited tables to no more than 6 people and removed the majority of our barstools.”

The bar went on to state that all staff members will be tested for COVID-19 in the coming days and plans to reopen as soon as possible.

“We will continue to make masks and gloves mandatory for all bartenders, continue our increased sanitizing efforts and keep our capacity to a minimum,” bar managers stated on Facebook.

A request for comment on reclosure planning from the city of Sandpoint went unanswered, but Panhandle Health District Public Information Officer Katherine Hoyer told the Reader that, “The decision to pull back would be made as a regional decision involving input from our mayors, county commissioners, and our Board of Health. Local metrics that we will monitor in order to make those decisions include, but not limited to: number and trend in new infections; positivity rate; number and trend in COVID-related deaths; local outbreaks; and local hospital capacity, including PPE, emergency department visits, total bed and ICU capacity.”

Hoyer added that, “It is nice to see restaurants making the proactive decision to shut down and clean. Restaurants closing should be a powerful reminder to others to implement productive prevention efforts so we don’t have to pull back on the reopening stages. We can remain open, but we need everyone to do their part to keep each other safe.”

Meanwhile, the State of Idaho Controller’s Office issued a news release June 24 touting the $536 million in federal funding it had administered from the U.S. CARES Act coronavirus support bill passed by Congress on March 27.

According to the controller’s office, among the recipients of the $1.25 billion federal program is the Idaho Rebounds Cash Grants for Small Businesses program, which gives monetary support to small businesses in a one-time grant to help alleviate financial stress from the virus. Other monies go through the Idaho Rebounds State, Local, and Tribal Community Support program, which reimburses state, local and tribal government expenditures used to fight the coronavirus.

Fighting the coronavirus took on a different meaning for some Idaho lawmakers, who gathered in defiance of health officials’ guidance in Ada County to pursue an ad hoc session of the Legislature on June 23, intended to push back against Governor Brad Little’s authority to dictate the closure — and reopening — of businesses in the state amid the ongoing pandemic.

According to reports, 15 legislators, including Blanchard Republican Rep. Heather Scott, gathered at the Statehouse with approximately 200 onlookers — many of them armed and associated with Ammon Bundy. Bundy and his family have been instrumental in several clashes with the government in recent years, including the Bunkerville, Nev., and Malheur County, Ore., standoffs.

It seems unlikely that anything discussed at the June 23 gathering could be legally binding, and reports from the capitol are that no votes or legislative action were even undertaken.

Concern over COVID-19 public gatherings notwithstanding, the group putting on the 2020 Fourth of July celebrations in Sandpoint received their permit from the city on June 19, according to city officials.