I’m not going to lie, my initial instruction with this article was to highlight the effects of climate change in our area. I got 500 words in before I felt disgusted.

Everyone has heard this. The doom, the gloom, the finger pointing. Enough, we’re all sick of it. 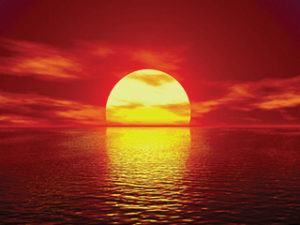 People are tired of being so dang depressed, being treated like idiots because their beliefs are different, of feeling guilty.

I’m going to talk about climate change, and I’m not going to shake a fear stick at you. You’re not a bad person because you drive an SUV or because you use a plastic spork for lunch twice a week.

We’re going to look at this from a whole new perspective.

The largest, and most prevalent argument against trying to take action against climate change is that it will damage our economy. I’m going to show you why that’s not true, and I’m going to use an example that may shock you.

Let’s imagine some gargantuan governmental money dump. We’re talking $15-plus billion dollars over four years. The only purpose for this, you are told, is national security and to beat the enemy.

In my opinion, only able to see this information, I would tell you this is a colossal waste of money and shouldn’t be considered. That money could be used for education, humanitarian efforts, or infrastructure.

It turns out the Space Race was actually a very important event and bolstered the United States economy in ways no one expected. Satellite TV, VOIP, the worldwide web, a massive influx of free and accessible knowledge around the world because we threw money at what was essentially a political whizzing contest.

Our exploration of climate change is no different, and I’d like to show you some of the possibilities.

An atmospheric imbalance of CO2 is the primary cause of a changing climate. We need some in our atmosphere, but if we have too much or too little, things start going crazy and bad things happen. To tip the balance back in our favor, we need to take some of that CO2 and split it into carbon and breathable oxygen.

This is an area of study right now. We’ve figured out how to do this with ultraviolet lasers, a first step towards a low-energy solution.

There is virtually no limit to what you can do with carbon. Buildings, clothes, robots, alcohol, you name it. If we had a technology that could pull carbon from the air in a controllable manner, we would start seeing carbon retailers that can cater to any industry in bulk, while cleaning up our air and bolstering agriculture globally in the process.

Currently, we have small-scale technology in place showing promise when applied to coal factories. The CO2 burned off during manufacturing is vented into a machine that forces it underground to make pure carbon while O2 escapes. It’s expensive right now, but new tech always is at first.

A pair of pure-carbon sneakers have been built using this method paired with a 3D printer.

A big point of contention is solar energy. Workers are understandably perturbed at energy companies turning to wind and solar, which has a ripple effect of phasing out high-paying blue collar jobs.

If I’ve learned anything my life, it’s that things break down, and skilled people are always needed to repair them or expand.

I believe some energy companies already do this, but it seems logical to me to give first crack at these new jobs to people from the fossil fuel industries, or even to subsidize training for these new positions and incentivize companies to move or adopt skilled labor rather than just lay them off and bombard them with blame for climate change.

Batteries are another important technology.

Solar doesn’t work at night, and wind stops working on a calm day. What are you going to do? You need to store energy to even this out. Batteries are the gateway to this.

Tesla is working to overcome this hurdle at their Gigafactory, and they’re not the only ones. Whoever makes the next great battery will become an energy giant.

Imagine a portable battery that could keep your laptop running at full for a day, or even a week. Imagine being able to drive 500 miles in an SUV run only on battery. What if a train could do that?

If the cost of operating a vehicle went down by half, how much do you think that would bring down the price of things at the store? Cost may go down, but value would go way up.

I believe talking about climate change isn’t an “either, or…” conversation. Arguing only gets us so far. We need to listen and share. Let’s change the direction of climate discussion, see how we can make a profitable and valuable future with technology while enriching our home.

I mean, if you can figure out a way to make money and make our planet flourish, why not do both?

If you’re ready to open the discussion, Mike Bauer, the library’s lifelong learning and adult program coordinator, will be hosting a four-part program on climate change.

Pushing the Limits, a free four-part reading, viewing and discussion series, will begin Aug. 5 and will be hosted at Monarch Mountain Coffee from 1 p.m. to 3 p.m.

It’s a casual setting for an open-ended discussion showcasing the impacts of changing climate in our area and ways we can adapt and thrive in spite of it.

Looking for more info? Check it out on our website or come see us at the information desk.

Hope to see you there!