Have you ever washed your hands and stopped to wonder what makes soap so special? How does this slippery bar of soap sitting in a tiny puddle of lukewarm water all day make your hands clean? Most things sitting in warm water for extended periods of time are conduits for disease, but not soap!

Soap does a phenomenal job at destroying bacteria and other microbial life on contact, but it won’t keep that surface sanitary forever. Once the soap is gone, bacteria is free to move back in. Soap performs this destructive action on bacteria by breaking down or disrupting the lipid bilayer of cells it contacts — this bilayer is essentially the “skin” that keeps everything inside of a cell in place. When soap and water wash over the cells they contact, it’s like the Kool-aid man bursting through the wall of the cell, which is awesome for us, but not so awesome for the cell as its innards are scattered all over the place and it is effectively destroyed.

If soap is so destructive for cells, why doesn’t it harm our skin cells? 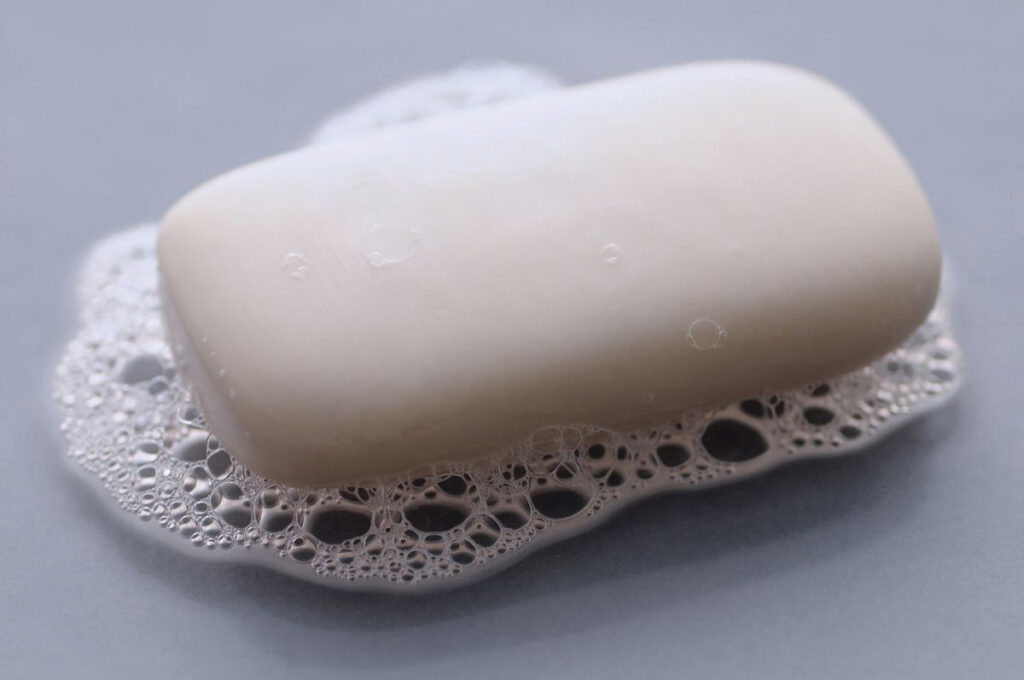 Put simply: It does. We also have an incalculably large number of skin cells that are constantly regenerating — far too many to severely damage with soap unless you spend hours upon hours lathering every day. The outermost layer of your skin, the epidermis, will actually completely die and regenerate over the course of about 27 days. In actuality, there is a layer of bacteria all over your skin at all times. Washing yourself with soap will actively clear this layer of bacteria before the soap will deal any serious damage to your skin. If the thought of having a microscopic ecosystem crawling all over you makes you feel the need to douse your whole body in hand sanitizer, don’t worry: It’s perfectly natural to be covered in all manner of microbial life. It’s everywhere, especially on your skin.

That being said, what is soap made of? It’s not a naturally occurring mineral like salt, and we don’t have whole fields of soap plants ready to sprout.

Soap is made by mixing three substances: fats, oils and alkalis. Fats and oils come in many different forms, from butchering animals to coconuts, avocados, and other fatty fruits and vegetables. Vegetable oil is frequently used in soapmaking because of the low cost associated with obtaining it as opposed to something like pig fat, which requires a substantial investment of time and food to develop and is considerably messier when factoring in butchering the animal, as opposed to harvesting vegetables and extracting their oils.

Alkalis come in a number of different forms, but one of the most common forms used throughout human history is wood ash. There is a historical record of people using wood ash to make soap as far back in time as 2800 BCE, in ancient Babylon. Wood ash was frequently used, perhaps accidentally, throughout the Middle Ages as well. Medieval workers would tend to fires, covering their hands in ash and soot. The workers would then go to wash their hands in water, which would cause a reaction between the ash and the oils naturally present on their hands that would create a basic soap that would solubilize the gunk on their hands, allowing the water to wash it away.

As simple as this sounds, washing everything with wood ash is wildly impractical. Creating huge volumes of soap in the ages preceding the Industrial Revolution was a laborious and costly task — one of the many reasons that hygiene throughout most of human history has never been viewed as a crowning accomplishment by our species. Because of these costs associated with the production of soap, soap was generally not used to wash oneself, but instead to clean things like cookware and occasionally clothing. It doesn’t take a professor of microbiology to understand that if you didn’t clean your cooking pot between uses, eventually you’d start getting sick — even people with no understanding of microbiology understood this to varying degrees throughout history.

We are fortunate enough to live in a time where mass-production of sanitary products like soap is commonplace and inexpensive, especially as the role of soap has rapidly evolved in the past 150 years. Industrial degreasers act like hand soap on steroids, emulsifying heavier oils derived from petroleum fossil fuels, and allowing for water to break them up and wash them away without seriously harming us in the process. The compounds responsible for this reaction are called surfactants. Surfactants in dish soap are one of the reasons that people will tell you never to use dish soap on a cast iron pan, as the dish soap is designed to break the surface tension between the water and the oil, allowing the water to wash away the oil. This isn’t completely accurate when talking about the seasoning on your cast iron cookware, though, as the frequent oiling and heating of the cast iron creates a layer of polymer that isn’t broken up and carried away by dish soap. Your pan will be damaged if you allow it to soak for extended periods of time, regardless of whether or not you use soap on it.

Water: It’s the most powerful and destructive force on planet Earth.