Here in Mad About Science, we love giant explosions. On Earth, the explosions don’t get much bigger than the ones that created the Yellowstone Caldera, which you may not realize is actually at least four calderas.

Calderas form when the magma chamber of a volcano has vacated all of the magma. The massive hollow chamber beneath the mouth of the volcano isn’t able to support the tons and tons of rocks above and it collapses inward to create a massive stone bowl. This makes calderas collect water and create ponds, lakes or river basins. We’ll talk about a few of Yellowstone’s calderas later. 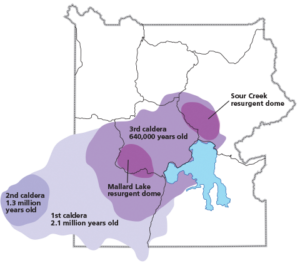 Yellowstone exerts a youthful vigor, having had at least four major eruptions in the past 2.1 million years. The first was the Huckleberry Ridge eruption, which created the Island Park Caldera. This thing is 45 by 40 miles across, which I find totally mind-blowing. Even crazier, the 1553 cubic miles of ashfall from this eruption covers one-third of the continental United States. A third of the country!

Yellowstone is probably most famous for the Lava Creek eruption. This eruption happened 630,000 years ago, which means the Neanderthals were wandering around Europe when this eruption happened. That’s not even the craziest part. The tuff, rock formed and ejected during the eruption, covers HALF the United States. That’s STILL not the craziest part. There are places where the tuff is 600 feet thick. That is enough dang rock to bury the Space Needle!

Various forms of media, from novels to local news stations have done a pretty good job of stoking volcano fever, the idea that the next cataclysmic explosion could be moments away in our own backyard, but you can rest easy: this isn’t very likely. The chance of Yellowstone going all doom-boom again any time soon is really small. In fact, the chance of Yellowstone never erupting again is higher than the chance that it will wipe out the United States.

Even if the end were nigh, it wouldn’t be some unpredictable spur of the moment kind of eruption. Yellowstone is one of the most studied volcanic places in the world, right behind Hawaii and Iceland, which are basically just volcanoes that people live on. Tremendous park-wide earthquakes would be monitored for weeks, perhaps months, before any eruption were to occur. It’s not like every disaster movie in the ‘90s where nobody will listen to the only scientist studying literally one of the biggest explosion-makers in the entire world. There are a lot of people watching Yellowstone at all times.

Supervolcano eruptions in the past have changed the climate globally in extreme ways. The Toba eruption 75,000 years ago caused a 10-year winter, reduced the temperature of the planet for at least a thousand years and may have driven the homo sapien population (that’s us, bee-tee-dubs) down to as few as 3,000 individuals. There are about that many tigers left in the wild, and they’re on the endangered species list. Talk about a close call!

If you were to look at a map of the locations of the calderas of Yellowstone, you’d swear they were moving northeast. The Hawaiian islands do something similar, where it looks like they’re moving southeast. What’s actually happening is the hotspot is staying exactly where it’s been since its formation, but in Yellowstone’s case, the North American Plate is sliding southwest. This doesn’t sound like a big deal, but it is. I can’t put a number to how awesome this is. Think of it this way: An entire continent worth of rock, trees, living things and water is just casually sliding across a giant cutting torch and a world-sized ocean of molten rock. If you want to make a yo’ mama joke, tectonic plates might be a good place to start.

Yellowstone is famously home to many natural geysers, including the most famous of all: Old Faithful. Geysers are pretty neat; they’re fairly rare and can only exist in a few places on Earth with prime conditions. Essentially, they originate with a crevice in the ground that can extend down as much as 7,000 feet. Water from the surface drains into the crevice and collects. Hot rocks heated by magma at the bottom of the crevice cause the water to boil and turn into steam, which builds pressure. With only one way to escape, the pressurized steam shoots upward, bringing water with it. The more simple the crevice, the more predictable the geyser, as is the case with Old Faithful, which can launch water up to 185 feet every 45 to 125 minutes. Never more, never less, though the time between eruptions has increased in the past few decades, probably because of subterranean earthquakes that can change reservoir levels.

We know a lot about Yellowstone, but there’s a lot more we don’t know about it. It’s a testament to the graceful beauty and awesome power of our world. It’s a place we should all visit to respect at least once in our lives. While there, it helps to think for a moment: You’re standing in a spot, where, 635,000 years ago, an explosion happened that was so immense that it vaporized rock, flora and fauna for at least 60 miles in every direction. Awesome.