His passion for learning lies elsewhere: in the kitchen. 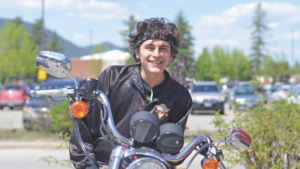 “You really learn something new every day, and it’s a different kind of learning,” he said. “You’re not going to find that anywhere else besides the kitchen.”

At 18, Bennett works as a sauté cook at Forty-One South and aspires to one day open a restaurant of his own in Sandpoint, ideally offering French or Italian cuisine.

“My life in the kitchen has been crazy, and I love it,” Bennett said. “All I want to do is grow and be better.”

Bennett’s kitchen career began in the dishpit of the Chimney Rock Grill. After serving, busing and washing dishes a little, he began working as a prep cook on his days off. Under the guidance of chef Michael Uhnak, Bennett picked up the basics of cooking, and advanced to a line cook. When Uhnak went to Farmhouse Kitchen and Silo Bar, he followed.

“[Michael] was a huge influence in my life. He’s helped me through a lot mentally, physically, just all around,” Bennett said. “He taught me a lot of what I built off of, and I just grew from there.”

At Farmhouse Kitchen, Bennett continued to grow and served up his own specials on Tuesdays and Sundays. He moved to Forty-One South when he was offered a position as a sauté cook.

This winter, Bennet plans to earn his associate’s degree at Oregon Culinary Institute in Portland — his mentor’s alma mater.

“Michael and I flew down there to check it out,” he said. “When we were leaving, he told me that’s where he went to school. I didn’t know that, and when he told me, I was like, ‘Wow, this is it.’”

He will be working through the fall to save up to pay for tuition and plans to find work in a kitchen while in school.

During high school, Bennett was passionate about art, especially glass blowing, and hoped to attend art school. After entering the world of food, his creativity and eye for perfection translated seamlessly.

“I got really into being so precise and intricate with everything I cook. Every plate that goes out, my name is written on it. I made that, and no one can tell me otherwise,” he said. “Presentation is everything.”

After going to school and continuing to explore what he called his “food thought”, Bennett eventually hopes to return his cooking aspirations to the Sandpoint area.

“I’m excited to create my own journey as a chef, and I’m so excited to teach younger people how to cook. I want to pass along all I’ve learned from those before me.”