Whether you love them or hate them, video game achievements have had a remarkable impact on our modern lives – even to people that don’t really play games.

Achievements, trophies, badges, or whatever your console of choice calls them, are essentially rewards for completing a task a developer wanted you to complete. Traditionally, video games were fairly linear products: You have a goal, which is to beat the game. Once you’ve beat the game… then what?

Achievements muddied those waters, expanding on “Then what?” as well as what qualifies as “beating the game.” With the help of a little psychological trickery, video game developers bamboozled us all into going the distance and obeying orders, despite believing we had been fighting the system the whole time.

These achievements generally come with a point system attached to them, a virtual measuring stick we can hold against our friends to evaluate our superiority at conquering predetermined challenges. However, it’s more complicated than just “showing off.” 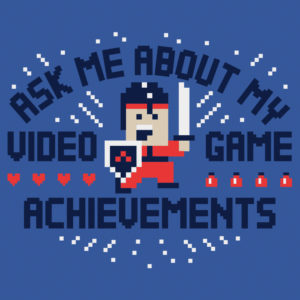 Researchers from Carnegie-Mellon University in Pittsburgh held an experiment in the 1960s, offering students challenges to solve puzzles. After a brief window of solving puzzles, the researcher would excuse themselves and offer the students 13 minutes of unsupervised time in the room. Research showed that the students would spend an average of 4 minutes of that unsupervised time completing more puzzles. Later, the researchers would perform the same experiment, but offer a $1 reward for each completed puzzle in that time. The promise of a reward showed a 26% increase in time spent working on these puzzles.

Achievements in video games offer developers a means to artificially increase longevity in their product while presenting a reward that’s meaningful to the player, but financially useless. It’s not feasible to offer real cash rewards for game completion, but fake rewards for numeric prestige come with very little expense, and is a generally gratifying experience for the consumer.

The presence of a finite number of achievements in any given game also plays on the human brain’s desire to see tasks through to completion, a trait many erroneously cite as “OCD” or “obsessive-compulsive disorder.” Humans like to complete tasks – it’s hardwired into our DNA. So long as the task still provides an ample challenge or some level of prestige in its completion, humans are always willing to see it through. Achievements do a tremendous job of playing off that innate human desire to increase the longevity of a product.

Video game achievements fulfill a similar function in our brain as food and sex, pinging the reward center of our brain, the nucleus accumbens, to release dopamine into our nervous system that makes us feel good. This release of dopamine pushes us to repeat these tasks to create a cycle called Pavlovian reward learning – named for Ivan Pavlov and his famous bell (which, by the way, may not have existed at all).

Between 1886 and 1921,  Pavlov performed a number of physiological experiments on dogs in a laboratory, measuring the effects of conditioning on the canines’ cerebral cortices. Basically, when the dogs performed an action, like pressing a buzzer after a prompt, the dogs would be rewarded with a treat. Over time, the dogs would begin salivating in anticipation of the treat any time they hit the buzzer, not only when the treat appeared. It’s actually considerably more complex than that, but I’m on a word count.

Returning to the topic at hand, video game achievements and the influence they play in your life, most of us have spent a considerable amount of time on social media. Every time you put a piece of yourself out there for the world to see, your heart swells and your mind races with every thumbs up, heart and poop emoji. On the internet, likes are their own digital currency, displaying your marketability, reach and influence among peers. There are real-life monetary rewards for digital popularity, from increased business presence to the ability to directly sell yourself to advertisers – up to $550,000 per Instagram post. While the initial inspiration of the “like” was likely rooted in the emoticons of early-2000s instant messaging, the way in which the likes are now presented – filling your screen, blowing up your notifications with every new like, comment and subscription – are totally influenced by video game achievements.

The in-your-face pop ups of video game achievements (referred to typically as “toasts”), have wriggled their way into most of the apps on your phone from banking to purchasing and most strangely, bill-paying. They make us feel good and accomplished, but most importantly to sellers: they make us want to buy more. It’s a small and inexpensive cerebral trick, playing on one of the most primitive parts of our brains that helped us evolve into the globalized species we are today.

Video games and psychology have a brief but storied past, so trust me when I say this won’t be the last time I throw some sneaky video game science in your face. While video game achievements didn’t rise to popularity until 2005, the concept was actually theorized in 1982, initially implemented as the high score ladder that would fill so many arcades across the world. Nowadays, achievements often offer a special in-game unlock for completing them, such as a new character skin, a new mount to ride into battle upon or some other cool cosmetic effect you can tout to your friends.

Now if you’ll excuse me, it’s supper time and I’ve got a bell to ring. Stay curious, 7B.