Mad About Science: The Big Bang

This is it, the post you’ve been waiting for. The biggest, baddest, best of everything. Science, planets, stars, explosions and the explosion that started all other explosions. You’ve watched a show named after it, so now you’re going to learn about what it actually is.

This post is highly theoretical; it would be wrong to call it proven fact, because we weren’t there to witness it happen, and there are bits and pieces we are still missing from the puzzle to make it truly fit. Instead, based on our scientific observations and theories, this is the best possible explanation for what could have happened at the beginning of time.

In the beginning, everything happened really fast. I mean REALLY fast. Faster than your brain processes information fast. To properly theorize just what happened, scientists had to develop a new measurement of time called Planck Time. In short, it’s 10-43 seconds. That’s a decimal and 43 zeroes in front of a 1. During the first several Planck Times of the universe’s life, everything was hot, everything was bright, and everything was rapidly expanding. All of our favorite atoms weren’t even brought into existence within these first few moments. 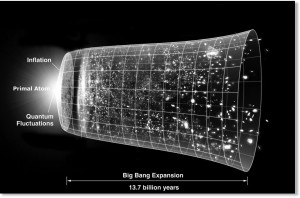 An illustration of the Big Bang.

If you want a visual of what it would be like to be around during the first second of the Big Bang, imagine blinding pure-white light and tremendous, universe-shaking sound and outward movement; like a powerful, explosive wind of the pieces of every atom that will ever be, spraying out like confetti at an exploding clown’s birthday party. It would be just as horrifying as that sounds.

Three to 20 minutes into this party, unstable helium atoms attempt to form, albeit somewhat unsuccessfully. The fact that they’re trying is what counts, and it marks an important place in the birth of the universe. The chaos continues on for almost 79,000 years, when the universe is almost completely matter with no space for anything else whatsoever. Basically, the universe is a massive, searing ocean of fusing gas, a sun bigger than all other suns put together.

379,000 years in, hydrogen and helium have finally got their game, and are able to hold electrons to form stable atoms. The gases are truly born! By this time, there may have been some growing expanses of space. Much of the still-growing universe would likely have  been a very, very bright place to live, but not for long. For the next 400 million years, everything goes dark. Hydrogen works its magic in this time, as large clumps, with the help of their electron buddies, start pulling together.

Over time, the first stars are born; probably huge guys that burn hot and fast, dying early in huge glorious displays. This is tragic, but necessary. The death of stars means the creation of new types of atoms, including heavier elements like iron, one of the things we need to be alive. Soon, the fledgling universe is awash in an ocean of stars and gravity, a hot and explosive time as everything expands outward. In a way, the universe is evolving.

As everything expands, the stars slowly get smaller, but more numerous. Their eruptions are forming heavier and heavier elements, and slowly, stars begin to form planets, swirling balls of molten rock and metal crashing into each other like some kind of colossal roller rink. One day, 9 billion years after the universe started, Earth spends some time in the stellar roller rink and manages to nail a long-dead sister planet named Theia real good. The impact of Earth and Theia is what creates the Moon, which helps balance our planet in its orbit around the sun.

The events of the Big Bang are still occurring. The universe is still expanding, and it will continue to do so until it can’t. When the energy finally runs out and matter is too far apart, the Universe will succumb to what has been called heat death of the universe, first postulated by William Thomson, First Baron of Kelvin, for which the unit of temperature measurement is named.

Well, that’s the idea, anyway. We’re still figuring the opposite end of the Big Bang out, but signs are pointing to expansion being the end result.

To add to this, I have some fun trivia facts about the Big Bang, and primarily the cosmic background radiation that came from it.

About 1 percent of the static on your TV and radio is residual “sound” from the Big Bang.

The scientists that first discovered the cosmic background radiation leftover from the Big Bang’s fireball thought it was a misread from pigeon droppings. They still won the Nobel Prize.

The cosmic background radiation acts as a baby photo of the universe, giving us a glimpse of what everything looked like very early on in the life of the universe. It shows where galaxies were first beginning to cluster together.

For a few brief years, the atoms that would make up you, your grandfather, Macho Man Randy Savage, Alpha Centauri, the brain of Steve Jobs, the phone in your pocket right now, the sun and stars on the opposite side of the universe were all a singular mass. One entity.

Just let that soak in for a second.