Help wanted at the arboretum

If you had visited Sandpoint’s public library 20 years ago this spring, you might have seen a notice posted there:

Lois Wythe, an herbalist and teacher well known for the gardens at her home on the Pack River, posted the notice in hopes of finding kindred spirits, and she found them: More than 60 people showed up at her meeting that April. By the following January, they had formed the Kinnikinnick Native Plant Society (KNPS) as well as a committee to look into creating an arboretum. 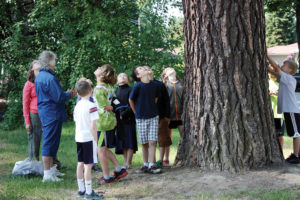 Local students check out the trees at the Arboretum at a 2016 Field Day event. Photo by Marilyn George.

A site in Lakeview Park had much to recommend it. Being in town, it was easy for people to get to. It already had mature conifers, and it was next to the history museum, which offered a historic cabin on its site as a space to store tools and materials. For its part, the city of Sandpoint was delighted to divest itself of responsibility for mowing the grass under the big trees, whose roots had been eating up their mower blades. So on December 16, 1998, the City Council unanimously endorsed the KNPS proposal to use 1.18 acres of the park as an arboretum.

Despite the lateness of the season, enthusiastic committee members met the next day to decide what they could do before winter set in. They spent a busy winter mapping 167 native trees on the site, and developed a detailed landscape plan.

Lois is legendary for the request she made of the committee: There’s some doubt as to whether she asked for three hours or four hours or one morning a week, but all agree on how long she asked them to commit: “for the rest of their lives.” Apparently no one blanched at this proposal, and they began their lifelong service on Arbor Day, April 30, 1999. When failing health forced Lois to curtail her activities in 2001, Sylvia Chatburn took over in the unofficial position of arboretum manager, and she is  only now winding down her long tenure.

While casual visitors to the arboretum might simply think they are walking in a natural woodland, in fact the many smaller trees, shrubs, and other plants are a carefully choreographed collection restricted to native plants. These include “exhibits”—including aspen and larch groves and a bed of wild medicinals (not necessarily Idaho natives), as well as representations of eight different north Idaho habitats, ranging from a dry forest to a wetland.

A volunteer is in change of each habitat, and no plant touches dirt with rigorous vetting. Just because a plant is everywhere does not mean it’s a native. Mullein, for example, must be familiar to anyone who’s walked a road or path in north Idaho in summer. “It’s a weed, but I think of it as a native weed,” says Mary Jo Haag, a current volunteer. It turns out, however, that mullein has been introduced from abroad. It’s a very successful resident, but it’s not a native, and it has no place in an arboretum habitat.

They city provides water, but when the group started, there was no water line to the site. Arlis Harvey, an elfin member of the original volunteers who worked with with juvenile offenders, recruited a number of her youthful associates to do their required community service by digging a trench from Ella Street for this purpose. Now water comes both through this line and from the wastewater treatment plant next door.

Arlis also make the bentwood arbors and benches that dot the grounds, while other benches and amenities have also been donated. Members are particularly proud of the mortarless stone wall that provides a welcome separation from the neighboring wastewater facility. “It’s a dry stack stone wall, and that is certainly a vanishing art,” says volunteer Rae Charlton, who remembers the nearly five-year moving meditation of volunteer Jeff Rich as he gradually transformed piles of donated stones into the wall.

The exhibits and habitats have matured nicely over the years, and the arboretum is fulfilling the original vision that members had for it: “Lois had the idea that an arboretum would be the best tool possible to show native plants,” says Rae. Visitors learn about their botanical heritage as they tour the habitats, and perhaps their appreciation for this legacy grows in the cool shade under the big trees. Volunteers lead tours for third-graders each spring, and other visitors include high school horticulture students and touring members of garden clubs.

But as the plantings have matured, so have the planters, and now there is a need for more kindred spirits who can continue the work. Lois herself was 78 years old when she held that first fateful meeting in 1997, and she and most of the rest of the originators have since moved away or gone on to rest among the native plants of the Elysian Fields. Sylvia is the last of the original committee, and she is ready to hand over her hoe.

Perhaps remembering Lois’s frank request for an extraordinarily long-term commitment, Sylvia is frank in describing what kind of volunteers are needed now: “Basically what we need is people that want to learn about native plants and are willing to dig dandelions,” she says frankly.

But Rae elaborates on the advantages: “It’s a lot of fun; we enjoy each other; we enjoy the work,” she says. Beyond the camaraderie and the health benefits of physical work outside, new volunteers will be able to develop their own botanical knowledge in the company of long-time KNPS members who have developed sophisticated knowledge of native plants. It’s a good price for a good education.

KNPS won’t ask you to commit for the rest of your life, but they are looking for volunteers who can put in a few hours a week for at least some lesser period of time. If that might be you, call Rae Charlton (610-1688) or Mary Jo Haag (255-4413).