A phalanx of voices:

In our modern world of pop rock and Justin Bieber, of repetitive lyrics and commercialization and Spotify, it is easy to forget that music can also be complex and challenging. That it can inspire real passion. Can draw people from miles around for no other reason than to perform Mozart, Bach, and Schubert. 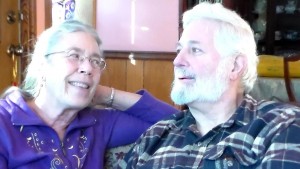 Mark and Caren Reiner at home. Photo by Jodi Rawson.

Next weekend, when Mark and Caren Reiner lead the Pend Oreille Choral and Orchestra in their annual Christmas concert, music will do just that. The performance will take place at St. Joseph’s Catholic Church on South Lincoln Avenue, December 11th at 7:00pm and December 13th at 3:00pm. Both are free of charge.

The Reiners, both of whom have advanced degrees in music, founded the Pend Oreille Choral and Orchestra twenty-one years ago after moving to Sandpoint from California.

“I was working as a substitute teacher when I realized that if there was going to be any serious music here, we would have to make it ourselves,” says Mark.

So, in 1994, he and his wife Caren formed their own choral group. The orchestra was added soon afterward.

Today the Pend Oreille Choral and Orchestra features 35 singers and 28 musicians. It is, according to Mark, the only true community group of its kind in the area. Unlike other local choirs and orchestras, they are never joined by professional Spokane musicians, or “ringers” as Mark calls them. Instead, The Reiners organization is made up entirely of passionate enthusiastic volunteers, ordinary people who travel from as far away as the Canadian border to be part of the Pend Oreille Choral and Orchestra.

“I don’t advertise,” said Mark, “so people come because they hear we do a really good job.”

Performers who sang in high school or college have the chance to get back to high-quality compositions.

“It is a challenge, and when they succeed, it makes them very happy,” said Mark. “They gain a lot of self-respect.”

However, Mark feels it is the love of music more than anything else, that keeps his musicians coming back.

The 63 enthusiastic Pend Oreille Choral and Orchestra volunteers work with a wide variety of music. Next week’s hour-long concert will span four centuries of composition and include choral, orchestral, and combination pieces. Four soloists will be featured during Mozart’s Regina Coeli. Then, during two Christmas pieces, the group will be joined by young students from the Waldorf School. The Reiners themselves will alternate between directing and adding their voices to the choir.

Mark and Caren give their special thanks to the Seventh Day Adventist Church, which has provided the Pend Oreille Choral and Orchestra with a rehearsal space free of charge for more than twenty years. They are also grateful to the concert venue, St. Joseph’s Catholic Church. It is the best place in town for a musical event that draws four to five hundred people, often with standing room only.

Stop by St. Joseph’s Catholic Church Friday or Sunday next week not only for a taste of the holiday spirit, Christmas music invigorated by singing children, but also to see true passion for serious composition, a love of music for music’s sake. Watch the performance of men and woman, who have dedicated themselves to perfecting voices and instruments for no other reason than the joy of it.

I would take that over another rendition of “Jingle Bell Rock” any day.