Have you ever watched a movie about war in ancient times? Most of it is just armored guys running at each other and brutally hacking at their opponents with the occasional horse slamming into a cadre of other armored guys, but sometimes you’ll get a glimpse of a wooden siege weapon flinging boulders and flaming bombs at castle walls.

Have you ever wondered how those siege weapons worked? Where did they get all of the processed lumber in the middle of a battle to build one of those things? Can you build one at home?

To answer the last one: Yes! You can build your very own homemade siege weapon, but you may want to take your neighbors into consideration before erecting a 20-foot-tall trebuchet that towers menacingly over their trellised gazebo. 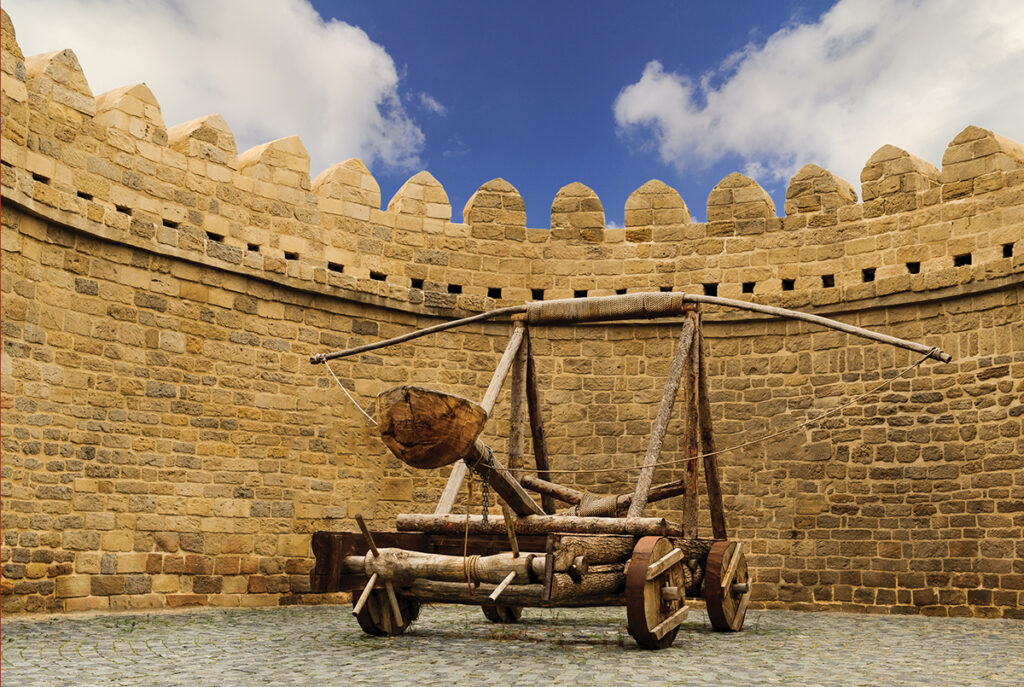 First, it’s important to note a distinction between different types of siege weapons and how they work. In the age of gunpowder, all of these siege weapons have fallen into obsolescence as the energy released by gunpowder is far more efficient as a propellant than converting calories into kinetic energy.

One of the most used siege weapons was the catapult, believed to be used first by the Romans around 350 CE. The basis of a catapult is pretty simple: a four-way frame attaches to wheels, allowing the dispersal of weight as well as a solid base to counteract the natural motion of the device. Eight men wind a large crank attached to a windlass that pulls the throwing arm down toward the ground, where it’s locked into place. This process transferred energy from the men turning the crank and stored it in the twisted ropes and cordage that bound the catapult. Once the soldiers released the locking mechanism, that energy was released by the throwing arm, which allowed it to fling upward. Upon impacting a padded support beam, the throwing arm would transfer all remaining energy to the object it was throwing, which would go on to transfer that energy into whatever it landed on.

Another siege weapon utilized to great effect by the Romans was the ballista. The ballista was essentially a supersized crossbow that launched man-sized harpoons instead of bolts — just like any other crossbow, which is essentially a regular bow affixed to a stock and a trigger mechanism.

The energy transfer from man to device would begin as the string was drawn back, usually by some form of crank. Once in position, the crank would be locked and the soldiers would load a projectile into the track of the device, in front of the cordage. The arms of the ballista were flexible, allowing much of the energy to be stored within them as they were pulled back by the cordage. Sometimes, these devices could be turned and aimed like a modern-day gun emplacement, and sometimes they just launched sharp objects in the general direction of wherever they were pointing. Once the lock was removed, the arms would snap back into place, dragging the string and the projectile with them as they transferred all remaining energy into the projectile, sending it on its merry, murderous way.

Battering rams were another common sight in the ancient world. A ram was often a rough log with a metal cap at one end, sometimes sharpened into a wedge. The ram itself would be suspended by cordage on a wooden frame that was usually covered to protect the soldiers wielding it from arrow fire and burning oil. Suspending the device made it easier for the soldiers to transfer energy into the device, drawing it backward and swinging it forward. This worked exactly like swings on a playground, but were considerably heavier. Using a metal cap added durability, while forming it into a wedge or a point allowed it to work like an axe against a tree, focusing the energy transfer into a smaller surface area and dealing more damage to one spot.

Curiously enough, battering rams were very easily countered by a simple architectural principle that didn’t appear until the early Medieval ages. Lords started putting their gates up a few stairs and building a wall eight to 10 feet across from the opening of their gate, which wouldn’t allow a ram to swing back and generate enough force to breach; similar to when you park on the street and two vehicles park directly in front of and behind you, giving you less than an inch on either side.

One of the most terrifying and effective siege weapons was the trebuchet. At first glance, the trebuchet looks like a complicated device that had no business existing in an age when people thought bad smells caused the plague. In actuality, a trebuchet is a scaled-up catapult that utilizes a sling instead of a bucket. It’s built on a triangular frame that acts like a fulcrum for the throwing arm, which acts as a lever. A huge counterweight hangs from the front of the trebuchet, which is drawn upward with a crank — once this counterweight drops, it flings the throwing arm upward and sends the payload in the sling hurtling across vast distances.

These devices were the heavy artillery of their day, and the level of engineering involved with constructing them likely carried a lofty price tag. Many of these devices were broken down between uses and transported by draft animals to protect these investments, as they weren’t designed to move very far on their own.

Are you interested in achieving a deeper understanding of how the mechanics of these devices worked? You can build some very simple and basic versions of these using just popsicle sticks, rubber bands, a battery and some pencils. Curious to know more? Email me at the library: [email protected] or come on in and ask about how you can build your own catapult!